A historian whose work focuses on how France’s colonialism has affected its more recent history will deliver the 2018 Edward Moritz Lecture in History on Thursday, April 26, at Kalamazoo College. 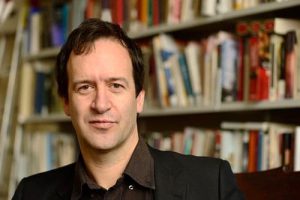 Todd Shepard, the Arthur O. Lovejoy Professor at Johns Hopkins University, will speak on “Decolonization and the Sexual Revolution.” His 2017 monograph, “Sex, France and Arab Men 1962-1979,” addressed how in France, questions surrounding discussion about subjects including gay rights, sexual libertinism, sodomy and rape differed from those elsewhere during that period because of the central roles that invocations of Arab men and the former French African colony of Algeria played in them. Mass immigration of Algerians to France began after the colony gained its independence in 1962, and a 2011 census counted almost a half-million French residents of Algerian birth.

Shepard’s writings also include two books, “The Invention of Decolonization: The Algerian War and the Remaking of France,” published in 2006, and “Voices of Decolonization: A Brief History with Documents,” published in 2014. He is currently completing “Affirmative Action and the End of Empires: ‘Integration’ in France (1956-1962) and the Race Question in the Cold War World.”  He has also published papers in numerous historical journals.

His honors include the Council of European Studies 2008 Book Prize and the American Historical Association’s J. Russell Major Prize for best work in English on any aspect of French history. He was also named one of the top young historians in North American by the History News Network in 2017.

The annual Edward Moritz Lecture, to be delivered at 7 p.m. in 103 Dewing Hall, pays tribute to the late professor Edward Moritz, who taught British and European history at Kalamazoo College from 1955 to 1988 and served for many years as the history department chair.