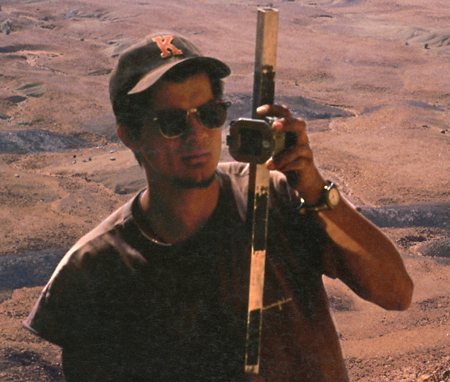 When the Wilson boys were kids, it was soccer over sauropods. Neither brother, Jeff or Greg, was particularly interested in dinosaurs.

Interests evolve over time. Today Jeff (Kalamazoo College class of 1991) and Greg are paleontologists and professors at the University of Michigan and the University of Washington, respectively. Both men will be speakers at the Kalamazoo Valley Museum (KVM) 2017 summer of dinosaurs. An article on the two (“Brothers in Paleontology”) appears in the Winter 2017 issue of museON, the magazine of KVM. At K Jeff majored in biology and studied abroad in Madrid, Spain. He was an outstanding Hornet soccer player–a four year letter winner, named All American (second team) one year and NSCAA-All Mideast Team two years.

In graduate school both Jeff and Paul studied and worked with renowned paleontologist Paul Sereno (University of Chicago). Sereno will speak about the intersection of arts, history and science in paleontology at the KVM on June 3, 2017.

Jeff and Greg specialize in different areas of the field. Jeff studies the paleobiology of sauropod dinosaurs, the largest land animals every to have existed on earth. His brother focuses on the small early mammals who coexisted with the dinosaurs.

In 1999, LuxEsto published a story about Jeff, who at the time was a paleontology doctoral student at the University of Chicago. Prior to that article Jeff had joined Sereno on five dinosaur expeditions, two in the Tenere Desert of central Niger in West Africa. (See photo of Jeff on one of these expeditions) Jeff was part of the team that discovered a new species of dinosaur called Sucomimus tenerensis, a 34-foot “crocodile mimic.” Jeff’s dinosaur expeditions have taken him throughout the world. And soccer has played a role in some of these trips. Jeff calls it a “universal language” very useful in building relationships when people lack fluency in one another’s first languages.

The Wilson boys sort of flipped the more predominant chronology–not so much interested in dinosaurs as kids, but big-time interested as adults. Why do so many kids love dinosaurs? LuxEsto posed that question to Jeff in 1999. “They’re big; they’re extinct’ and they attain heights we could never attain,” he said at that time. “They are the superheroes of animal life.” And, perhaps most important, “They are the gateway to a mysterious and strange world that is lost to us.”