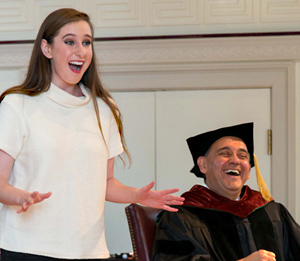 Kalamazoo College Family Weekend served as backdrop for the College’s annual Honors Day convocation. More than 250 students were recognized for excellence in academics and leadership in six divisions: Fine Arts, Foreign Languages, Humanities, Natural Sciences and Mathematics, Social Sciences and Physical Education. Recipients of prestigious scholarships were recognized as were members of national honor societies and students who received special Kalamazoo College recognition awards. In addition, student athletes and teams who have won Michigan Intercollegiate Athletic Association awards were feted. The students who received awards or recognition are listed below.

THE BRIAN GOUGEON PRIZE IN ART, awarded to a sophomore student who, during his or her first year, exhibited outstanding achievement and potential in art.
Kaiya Herman-Hilker
Qynce Chumley

LeGRAND COPLEY PRIZE IN FRENCH, awarded to a sophomore who, as a first-year student, demonstrated the greatest achievement in French.
Lauren Arquette
Danny Horwitz

MARGO LIGHT AWARD, given for excellence in second- or third-year German.
Eric Thornburg

CLARA H. BUCKLEY PRIZE FOR EXCELLENCE IN LATIN, awarded to an outstanding student of the language of the ancient Romans.
Emma Peters

CLASSICS DEPARTMENT PRIZE IN GREEK, awarded to an outstanding student in the language of the ancient Greeks.
Brittany Jones

PROVOST’S PRIZE IN CLASSICS, awarded to that student who writes the best essay on a classical subject.
Danielle Gin

O.M. ALLEN PRIZE IN ENGLISH, given for the best essay written by a member of the first-year class.
Kate Kreiss

JOHN B. WICKSTROM PRIZE IN HISTORY, awarded for excellence in the first year’s work in history.
Mackenzie Callahan

L.J. AND EVA (“GIBBIE”) HEMMES MEMORIAL PRIZE IN PHILOSOPHY, awarded to that sophomore who, in the first year, showed the greatest promise for continuing studies in philosophy.
Katherine Bennett
Garrett Sander

DEPARTMENT OF CHEMISTRY PRIZE, awarded for excellence in the first year’s work in chemistry.
Meghan Horal

LEMUEL F. SMITH AWARD, given to a student majoring in chemistry, pursuing the American Chemical Society approved curriculum, and having at the end of the junior year the highest average standing in courses taken in chemistry, physics and mathematics.
Collin Steen

FIRST-YEAR MATHEMATICS AWARD, given annually to the sophomore student who, during the first year, demonstrated the greatest achievement in mathematics.
Dahwi Kim
Allegra Allgeier

THOMAS O. WALTON PRIZE IN MATHEMATICS, awarded to a member of the junior class for excellence in the work of the first two years in mathematics.
Abhay Goel

COOPER PRIZE IN PHYSICS, given for excellence in the first year’s work in physics.
Kayla Park
Ricardo DelOlmo-Parrado

C. WALLACE LAWRENCE PRIZE IN ECONOMICS, awarded annually to a economics student who has done outstanding work in the Department of Economics and Business during the sophomore year.
Maria Franco
Hannah Kline
Logan Smith

C. WALLACE LAWRENCE PRIZE IN BUSINESS, awarded annually to a business student who has done outstanding work in the Department of Economics and Business during the sophomore year.
Cody Colvin
Jacob Wasko
Alex White

MARSHALL HALLOCK BRENNER PRIZE, given by the family and friends in memory of Marshall Hallock Brenner, class of 1955, to be awarded to an outstanding junior for excellence in the study of psychology.
Kyle Hernandez

MAGGIE WARDLE PRIZE, awarded to that sophomore woman whose activities at the College reflect the values that Maggie Wardle demonstrated in her own life. The recipient will show a breadth of involvement in the College through her commitment to athletics and to the social sciences and/or community service.
Malak Ghazal

GORDON BEAUMONT MEMORIAL AWARD, awarded to the student who displays qualities of selflessness, humanitarian concern and a willingness to help others, as exemplified in the life of Gordon Beaumont.
Sarah Bragg
Mireya Guzman-Ortiz

VIRGINIA HINKELMAN MEMORIAL AWARD, awarded to a student who displays a deep concern for the well-being of children, as demonstrated through career goals in the field of child welfare.
Moises Hernandez

Alpha Lambda Delta is a national honor society that recognizes excellence in academic achievement during the first college year. To be eligible for membership, students must earn a cumulative GPA of at least 3.5 and be in the top 20 percent of their class during the first year.

The MIAA each year honors students at member colleges who achieve distinction on the classroom and in athletic competition. Students need to be a letter winner in a varsity sport and maintain at minimum 3.5 grade point average for the entire school year.