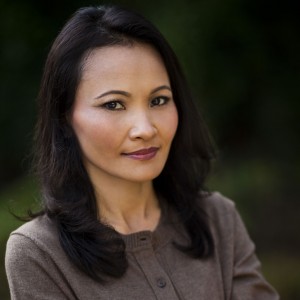 Vaddey Ratner, author of  “In the Shadow of the Banyan”

Kalamazoo College marks its 14th annual Summer Common Reading (SCR) program in Fall 2013 with The New York Times bestseller In the Shadow of the Banyan by Vaddey Ratner. SCR is the first step in Kalamazoo College′s first year experience. The assigned reading and short written responses lead to discussions with fellow first-year students, faculty and staff among other readers.

SCR began in 1999. Each year the author of the selected text visits campus and reads and discusses the work with the incoming class during orientation week. This year’s novel focuses on the character of Raami, a five year old girl living in Cambodia’s capital city at the time of the Khmer Rouge coup. “Often, when students first read a SCR selection, they don’t usually like the characters. But when the students interact with the author they become really involved, and they begin to enjoy the texts”, said Zaide Pixley, dean of the first year and advising.

In the Shadow of the Banyon was suggested by Writer in Residence Diane Seuss, one of three members of an SCR team that evaluates and determines each year′s selection. Other members are  Pixley and Marin Heinritz, assistant professor of English and journalism. According to Pixley, potential selections must be  “recent, appealing, well written, and intercultural. The author must be willing to visit campus and have the ability to engage with eighteen-year-old readers.”

During the summer the students are asked to write a response paper based on one of several prompts. Orientation week discussions focus on the responses and continue into the classroom with first year seminars. First year seminars were added to Kalamazoo College′s curriculum in 1990. The seminars develop the critical thinking and writing skills that are necessary for college-level work. Seminar professors read the SCR selection and students’ written responses, meet with the author during orientation, and discuss the book with their seminar classes.

Each seminar class is assigned a peer leader, an upperclassman student who mentors first-years and fosters community among the seminar members. Peer leaders often participate in the first year forums, special events that focus on the goals of the First Year Experience. Many of the forums connect back to the issues and perspectives raised in SCR discussions.

All members of the K community are invited to read In the Shadow of the Banyan before classes start this September. Author Vaddey Ratner will visit the campus on Friday, September 12, to read from her novel at 8 PM in Stetson Chapel. She will discuss her work with students at 10 AM on Friday, September 13.