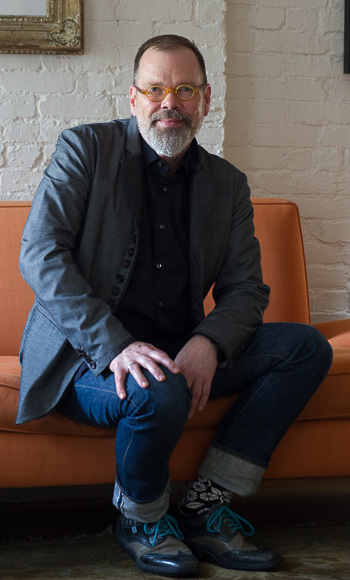 In May of 2013 alumnus David France ’81 returned to Kalamazoo College’s campus to present his Oscar-nominated documentary “How to Survive a Plague.” David has recently written and published a book of the same title, How to Survive a Plague: The Inside Story of How Citizens and Science Tamed AIDS. On November 21, the New York Times published a rave review of the work by writer and former editor of the New Republic Andrew Sullivan.

“A question has always hung over the reaction of gay men to the plague that terrorized and decimated them in the 1980s and 1990s: Why did they not surrender?,” writes Sullivan. “David France’s remarkable book tries to answer that question.”

The answer, David articulates in his history, is a courage that not only ended a plague but also revolutionized medicine, a kind of courage as remarkable as it is rare in human history.

After graduating from K with a degree in political science, David moved to New York City to study philosophy at the New school. A mysterious disease was killing many people around him, and no one was writing about it. So he began to investigate.

“I had only one science class at K, and I had to take it twice,” he told Elaine Ezekiel in May 2013. “Suddenly I’m interviewing bench researchers trying to see if their work offered any hope.” David trained himself about the virus and about the bench and clinical procedures as well as the federal bureaucracy involved in the development of medicines. He also relied on what he learned as a news editor for The Index.

David also had experience with the need to summon courage. He and his friends had established the College’s first gay and lesbian support group. “It was a dangerous time,” he said. “We had to meet off campus. There were constant threats of violence.” For an Index article that interviewed friends about what it was like to be gay at K David had to use pseudonyms to protect the sources.

Sullivan suggests the combination of David’s qualities, contacts, breadth of expertise and curiosity make him the indispensable author of this profile of extraordinarily persistent courage.

“It took years to gain traction, but the courage of the resistance turned out, over time, to be as persistent as the virus itself,” wrote Sullivan. “And the merit of this book is that it shows how none of this was inevitable, how it took specific, flawed individuals, of vastly different backgrounds, to help bring this plague to an end in a decade and a half.”

Sullivan lauds David’s passion and fairness.”You wonder, of course, how many of those deaths could have been avoided. France makes a strong case for the staggering insouciance of government at all levels, especially in the early years. He’s brutal about bureaucratic incompetence and political cowardice. And yet he is also fair enough to show that the science of disabling a dazzlingly resilient retrovirus was fiendishly difficult and that by 1982, 42.6 percent of gay men in San Francisco and 26.8 percent of gay men in New York had already been infected. The community’s own adoption of safer sex — and the vital gains activists made in pushing for cures and treatments for various opportunistic infections — made the most difference in preventing further catastrophe. But in the end, science takes time. Some made it over the line before the war ended. Many never made it. Some of us live lives still haunted by that distinction.”