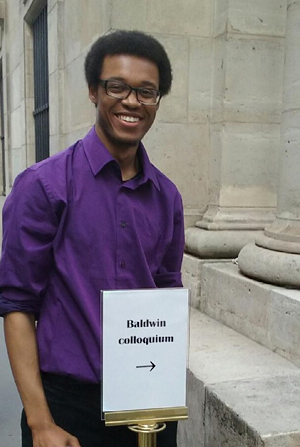 Justin Danzy ’16 always believed in himself and his writing; he just wasn’t sure others would feel the same way. When he began to work on his Senior Individualized Project (SIP) at Kalamazoo College, he had one thing in mind: authenticity.

His senior project seeks to understand authenticity in various forms of expression, and he decided to focus on works by James Baldwin and Rapper J. Cole.

The music of the latter nudged him to incorporate Baldwin into the SIP, which he titled “On the Question of Authenticity: Rethinking Black Male Identity through James Baldwin and Contemporary Hip Hop.”

“It was striking to me listening to J. Cole’s ‘Forrest Hills’ album and how similar it was to Baldwin’s story ‘Sonny’s Blues,’” said Justin.  “Baldwin and Cole faced questions of their authenticity throughout their careers,” he added. “For Cole, being a rapper from the suburbs speaking on his struggles, and for Baldwin being an educated black author writing about race. Both men used speech to show how artists are more than their labels and both believed authenticity is not measured by those labels.”

As Justin explored the work of the two artists and concentrated on the meaning of authenticity, he often found himself questioning how authentic would people perceive his work.  He wondered as well whether others had an interest into understanding authenticity and its nuances.

Turns out he needn’t have worried. His SIP supervisor, Associate Professor of English and Writer in Residence Diane Seuss encouraged him to enter his SIP into an open research paper contest.

And he won, which meant presenting his work during the three-day International James Baldwin Conference at the American University of Paris (France). He was the only undergraduate presenter. The trip to Paris was his first time out of the country.  Having the opportunity to attend the conference, he said, awakened a new confidence in himself and his scholarly work—the sense that his own ideas can be useful and significant.

“If I put in the time and effort and have a team to push me in the right direction, my ideas can add to the world,” said Justin.

Justin graduated in June and is spending two months in Uganda conducting research (the English major also earned a concentration in African studies).  “I know I am capable of bridging the gap between where I am and where I want to be,” he said. “That knowledge gives meaning to the hard work of the process.”