As global cyber threats target U.S. businesses and the government, organizations such as the Carnegie Endowment for International Peace respond, and so will Natalie Thompson ’19. 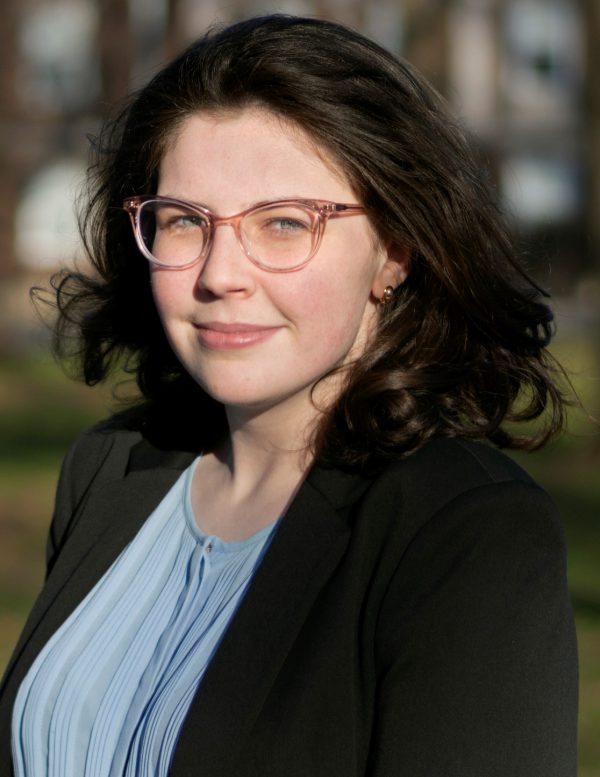 Thompson, a math and political science double major from West Olive, Michigan, is the first Kalamazoo College student to earn a James C. Gaither Junior Fellowship. Each year, Carnegie chooses about a dozen graduating seniors or recent grads from a pool of several hundred nominees to serve as junior fellows. The junior fellows work with Carnegie’s senior scholars for one year in Washington, D.C., to conduct research for books, co-author journal articles and policy papers, participate in meetings with high-level officials, contribute to congressional testimony and organize briefings attended by scholars, journalists and government officials.

Beginning Aug. 1, Thompson will work in Carnegie’s Cyber Policy Initiative, run through its Technology and International Affairs Program, to promote technology while reducing or eliminating cyber threats that could harm the country’s financial stability, data and transaction integrity, and communication chains.

Students applying for the fellowship are first nominated by their institution and prepare statements of interest and issue-specific essays for their program of interest. Carnegie selects about three or four students to interview for each position and must demonstrate some knowledge of and passion for their focus topic. Plus, according to its website, Carnegie selects only the top 5 percent of its applicants each year for junior fellowships with students.

“I think it’s an unparalleled opportunity,” said Thompson, who added this is just the second year K has been a nominating institution for the fellowship. “Think tanks and nonprofits in Washington, D.C., like Carnegie often prefer employees with several years of work experience or a master’s degree in their field in research positions like these. I hope to take my undergraduate degree and the great writing and research skills I learned at K and transfer them into policy expertise. It’s difficult to describe how exciting it is for me and I hope it’s exciting for the College.”

Before they graduate from K, students including Thompson complete a senior individualized project (SIP), serving as a capstone to their educations in the liberal arts and sciences. Anne Dueweke, K’s director of grants, fellowships and research, who serves as the College’s nominating official for the fellowship, said Thompson’s SIP, about media technologies and their impact on public deliberation, probably factored into Carnegie’s decision to select her.

“I think her SIP certainly had something to do with it along with other experiences in which she has been able to develop her research skills,” Dueweke said. “But Natalie really stands out in her intellectual curiosity. She is incredibly well read and engaged in the topic of cybersecurity, and on many related topics as well. She is also a very sophisticated thinker and writer. The Gaither Fellowship is a perfect fit for her.”

Global Cyber Threats on the Rise

As an example of the cyber threats she might address as a fellow, Thompson described “deepfakes.” Deepfakes are an artificial intelligence-based technology that produce or alter video or audio to convincingly present something that didn’t occur. Video and audio manipulation techniques are not new, but technological advances have made the manipulations more convincing. Usually this means criminals or hackers fool the public into believing a famous influencer, business executive or politician said something they never did. She could explore what such a tactic means for government intelligence connections, diplomatic relations and state-to-state hacking.

State-to-state hacking concerns also have escalated in recent weeks because of China’s government and how it allegedly spies on U.S. businesses. National Security Agency, Federal Bureau of Investigation and Homeland Security Department officials brought to light some of those issues this month at a cybersecurity conference, as reported through the Washington Post.

As a result, “what policies will we need to consider?” Thompson asked. “Could there be diplomatic, legal or military responses? Right now, we don’t have clear policy standards or regulations for what to do in these situations.”

Thompson said she’s comfortable in Washington, D.C., as she was among K’s first students to study away there through an internship with Whitmer & Worrall, a bipartisan government relations and strategic consulting firm. However, several K faculty and staff members were instrumental in encouraging her to seek the fellowship. Those influencers included Dueweke, Luce Professor of Complex Systems Studies Peter Erdi, and Kalamazoo College’s Political Science Department.

“Dr. [Jennifer] Einsphar especially has been a tireless mentor for me during my time at K,” said Thompson of the associate professor of political science. “We’ve had so many conversations. She’s an incredible scholar and I’ve loved her courses. Dr. Erdi has also been a tireless advocate for me. He encouraged me to combine hard science and social science, and helped me think from an interdisciplinary perspective.”

Learn more about the Carnegie Endowment for International Peace and the James C. Gaither Junior Fellowship through the organization’s website.