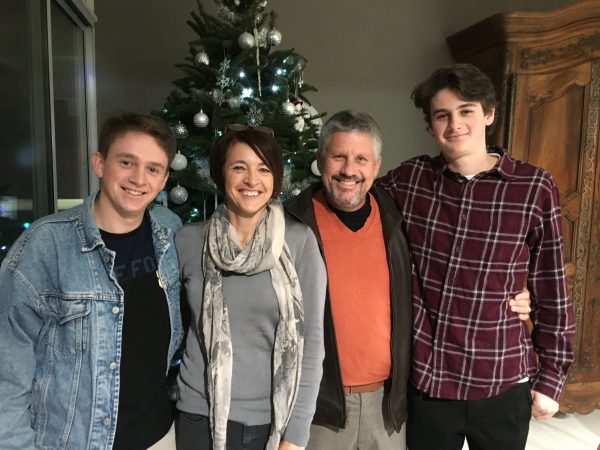 Lincoln McBride with his partner, Claire, and sons Max and Leo.

Kalamazoo College chemistry graduate Lincoln McBride ’80 has a pioneering connection to the fight against COVID-19: Working at Applied Biosystems Inc. (ABI) in the 1990s, he founded and led the technology program that commercialized real-time polymerase chain reaction (PCR), a system to detect and quantify small amounts of genetic material with unparalleled speed sensitivity and accuracy. The latest generation of this technology is the worldwide workhorse and gold standard for COVID-19 testing at this critical moment of the pandemic. Dr. McBride talked with K about his time at the College and his work on this important technology.

Can you tell us about your K-Plan and your experience at K?
Candidly, my only application went to K on a strong hunch I’d prefer a small school, not too far from home, and with a solid academic reputation. During freshman year, math was my intended major. Sophomore fall, I had the great fortune of taking organic chemistry with Professor Kurt Kaufman. He eventually hired me for two years to synthesize psoralen analogs to treat psoriasis. The key ingredient of my first synthesis was an abundance of cyanide dissolved in dimethyl sulfoxide! Apparently, Kurt didn’t believe in training wheels. 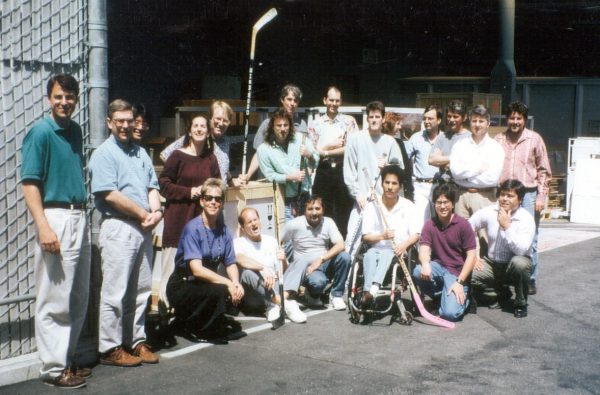 Lincoln McBride (far right in pink shirt) and his product team, surrounding the crate holding the first 7700 Sequence Detector prototype about to be shipped to Genentech-Roche in 1995.

Although math and science came easily to me, reading and writing were unnatural work. So, at Rochester (Michigan) High School I chose Spanish. My sophomore spring at K was spent in Madrid, and if allowed one “do over,” I’d choose two quarters abroad to lock in the language.

My senior individualized project (SIP) was in the analytical chemistry department of the Upjohn Company in downtown Kalamazoo under the supervision of Margaret (Peggy) Merritt. She and her staff were helpful and patient as I stumbled along trying to develop densitometry assays of phospholipids separated by thin layer chromatography. I considered my SIP a failure; however, in hindsight, it gave me a passion for analytical chemistry which aligned better with my affinity for math. This hands-on exposure led and enabled me to develop and commercialize revolutionary bio-analytical systems. 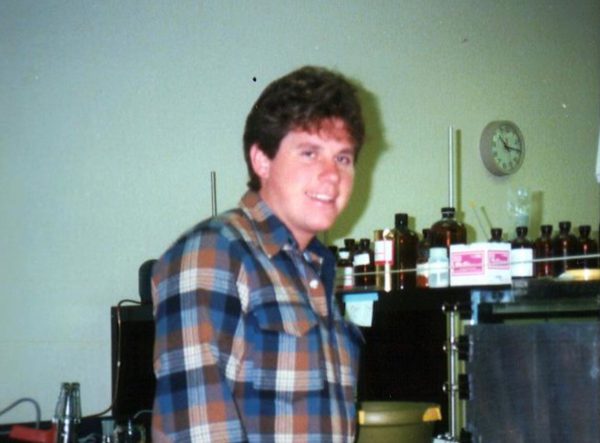 Lincoln McBride in the lab at ABI.

Were there K faculty who were a major influence on your path to graduate school and your career path?

Although not totally unique, K’s intimate and informal culture between student and professor was my most immediately impactful ingredient. It began with the late T.J. Smith’s one-on-ones in his office after his linear algebra class. It remains my favorite class and subject of all time.

I’m overwhelmed with bittersweet emotion as I type about my relationship with the late Professor Kaufman. If someone tells you a teacher can totally change your life, know that it’s true. I marveled at his charismatic command of the largest and many would say K’s most notorious class in that era, organic chemistry. His every sentence expressed his zest for life. At the top of my midterm exam, he wrote, “I believe you have the soul of an organic chemist.” I was hooked.

After synthesis work in his lab, we’d play tennis, occasionally with dinner or drinks afterwards at the Kaufmans’. In my senior year, he indicated unexpectedly that he would award me with K’s Heyl Scholarship for a full ride at Yale, but before he did, he wanted to make sure I’d accept. Without much thought, I told him I was hesitant to live on the East Coast and wanted to go to California. He didn’t bat an eye. Shortly thereafter during the last conversation I ever had with him, he gave me two pieces of prophetic advice: The future and your future is in biochemistry and you must take at least one biochemistry class. Then, he apologized for having run out of time to teach chapter 36 of Morrison and Boyd, “Amino Acids and Proteins.” He flipped through its pages and singled out an exciting new synthetic technique of synthesizing polypeptides on a solid support.

Within weeks of Kaufman’s prophetic advice, he suffered a debilitating stroke, a tragedy that shocked and saddened me beyond words. Without his letter of recommendation, I’d eventually be rejected by both Berkeley and Caltech, yet I would land on the biochemistry floor at University of Colorado (CU). Almost miraculously, I chose Professor Marvin Caruthers as my thesis advisor; his group had just invented solid-supported DNA synthesis by the phosphoramidite approach, which would emerge as the most revolutionary enabling technology of the early 1980s for biotech research.

After you earned your doctorate in chemistry at University of Colorado, you eventually joined Applied Biosystems (ABI) in R&D. Tell us how you came to work on the technology now being used for COVID-19 testing?

Thanks to my foreign study experience, I had just enough courage to leave ABI’s R&D lab to be their international traveling scientific spokesman. During my short stint working for ABI’s vice president of marketing, I presented at the 1991 IBEX Conference in San Francisco, right before Russ Higuchi, the inventor of real-time PCR. After he revealed his invention, I introduced myself and stated that it would be a perfect instrument system for my company to commercialize. Russ was receptive, and I pitched this product line in front of the whole of ABI’s R&D and senior management at our annual “New Ideas Day.” ABI hadn’t commercialized a successful new product line in years and sorely needed one. The next week I was given the green light to investigate the technical and commercial feasibility of real-time PCR. The main obstacle was freedom to operate. So, in 1992, ABI merged with Perkin Elmer (PE) as their junior partner to acquire the key patent rights. I led the commercialization program of the 7700 Sequence Detector through its full release in 1997. This wildly successful product line thankfully thrives to this day, even outlasting PE-Applied Biosystems, which was acquired several times. Thermo Fisher Scientific currently owns the ABI brand.

How would you describe the technology and its lasting impact?

For readers seeking a technical description of how real-time PCR works, I recommend checking out the interview I did recently with University of Colorado. If you have further technology questions, I invite you to email me at Lincolnclaire2018@gmail.com.

As I noted in the interview with CU, 25 years after shipping our first prototype, my team and ABI as a whole can still be proud of the work we did. For a virus as a detection target, fluorescence, probe-based real-time PCR has proved to be the most sensitive and rapid way to measure its genetic material in a myriad of sample types.

Based on your own experience, what would you say makes a K education special?

There are a few key dimensions to highlight that best answer this most important question. Let’s start with the powerful combination of diving hands-on deeply into a specialized discipline, alongside K’s broad liberal arts exposure to our world. I worry my sons’ engineering educations were too focused and insufficiently enriching for gracefully living in our too rapidly changing world. Even for engineers and scientists, my experience is that key innovations often emerge at the interfaces between disciplines.

K’s graduation requirement of rigorous proficiency in a second language certainly was unique in the United States in the 1970s, and profoundly shaped my life. My quarter in Madrid helped me peel back layers of that difficult onion called French. In 1990, I met my French partner Claire Pairaud, mother of my sons, Max, 25, and Leo, 21. French became vital during dinner time to know what my toddlers and Claire might be saying about me!

K’s broad curriculum with its international focus gave me the confidence, wisdom and nimbleness to navigate our rapidly changing world.

Where do you live now?

I’ve lived in Belmont, California, since 1985. My son Leo, an industrial engineering major at Cal Poly, returned home to live with us now that his university has converted to remote learning. Leo landed a summer job manufacturing Real-Time PCR COVID testing kits at Cepheid. He commutes to Sunnyvale at 5 a.m. every morning. It’s no surprise that he’s been instructed to work weekends to keep up with overwhelming demand. He can be proud of his contribution to helping end this horrible world war against the virus.

How do you stay connected to K?

I belong to the Kalamazoo College Class of 1980 Facebook page. Until recently, I’d been actively reading and posting there. I’ve also taken summertime pilgrimages to Michigan to spend time with some of my dearest college friends, including Al Biland ’80, Jerome Kuhnlein ’80, Britt Lewis ’81 Dave Lewis ’82, Dave Op’t Holt ’80, and Barry Owens ’84. My 2021 goal is to drag Paul Lugthart ’80 and Jon Starr ’82 along.