The next time you see Sarah Kleppe ’19 around the Kalamazoo College campus, you might want to come to attention and deliver a sharp salute. The Spanish major from Colorado is now a cadet colonel in the Civil Air Patrol after a ceremony at the CAP Michigan Wing’s 2018 Conference in Bay City. 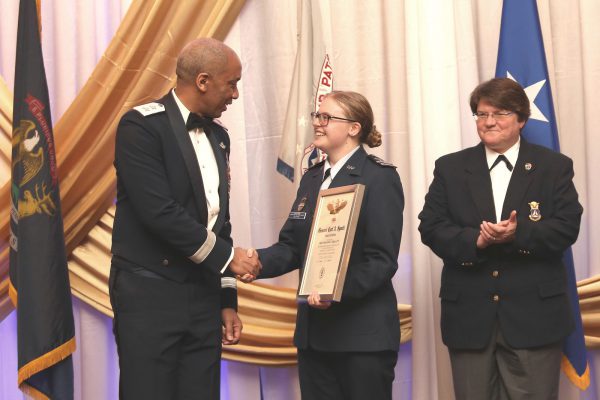 Kleppe is among the highest fliers in the CAP cadet corps — one of the fewer than 1 percent who manage to earn the Gen. Carl A. Spaatz Award, the organization’s highest youth honor. Recognizing excellence in leadership, character, fitness and aerospace education, it brings with it the cadet colonel rank, indicated by a three-diamond uniform insignia.

To achieve the rank, the already busy K student had to take two rigorous closed-book exams on all the material she’s learned in her six years as a cadet, pass a physical test based on U.S. Air Force standards and write an essay.

Like a typical K student, however, she says the work and study, along with years of weekly meetings, summer camps and other activities, are her idea of fun.

“It’s been a lot of work but it’s definitely a worthwhile program,” she says.

She was thrilled to receive the Spaatz Award, named for the first Air Force chief of staff, from Maj. Gen. Leonard Isabelle, commander of the Michigan Air National Guard. Also on hand was Maj. Gen. Amy Courter ’83, former national commander of the Civil Air Patrol and a member of the College’s Board of Trustees.

The Spaatz Award was established in 1964, and the first recipient was Douglas C. Roach of Michigan, who went on to serve as a pilot with the Air Force Thunderbirds aerobatic team. Kleppe is still working on her pilot’s license, and while she’s not aiming to fly fighter jets, she hasn’t ruled out joining the Air Force after graduation. 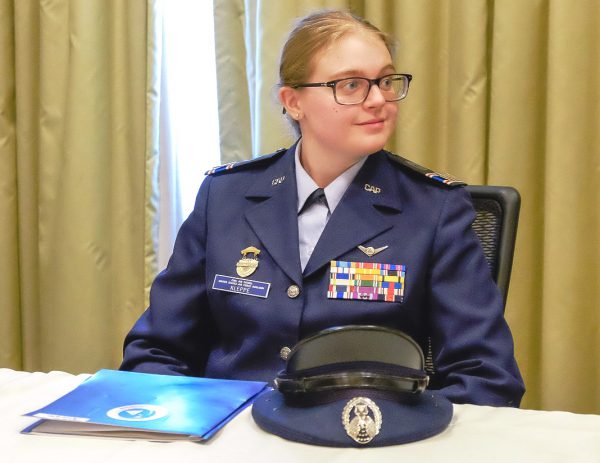 One thing is for sure: She will continue to be active in the Civil Air Patrol. She just turned 21 and is transitioning into the adult side of the organization, becoming cadet commander of Kalamazoo Composite Squadron. She also hopes to fill what she considers a gap in her cadet experience: participating in CAP “SAREXes,” or search-and-rescue exercises. As a civilian adjunct to the Air Force, helping find downed planes and rescue missing hikers is one of chief functions of the organization.

Despite whatever she might have missed along the way, however, Kleppe says she gained invaluable skills and experiences. She credits the Civil Air Patrol with teaching her everything from how to write a resume and cover letter to the fundamentals of leadership.

“It’s given me confidence in myself and taught me a lot,” she says. “I would be a completely different person had I not gone through the program.”

And besides, she says, from her very first cadet meeting in high school, “I had a blast.”