News and Events » News Releases » Cities in Revolt: Ferguson and Beyond — Conference at Kalamazoo College Will Explore Complex Threads of Racial Injustice, Reconciliation, and Healing
Tweet 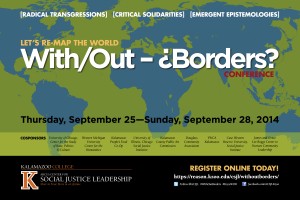 The complex issues surrounding the police shooting of unarmed black teenager Michael Brown in Ferguson, Mo., are sure to be discussed and analyzed for years to come. The Arcus Center for Social Justice Leadership at Kalamazoo College is making an early contribution to the discussion by convening leaders from many social justice fields—including some who have been on the ground at Ferguson and sites of other civil engagement—to explore policing, restorative justice, and resistance movements that are growing in American cities today.

Two major discussions are offered as part of the “With/Out – ¿Borders? Conference” hosted by the Arcus Center that will also explore other hot–button issues such as youth immigration and the Israeli/Palestinian conflict.

On Thursday, Sept. 25, from 9 a.m. to 3 p.m., a think tank titled “Policing, Racial Profiling, and Restorative Justice” will be held at the Douglass Community Association, 1200 W. Paterson St. in Kalamazoo. Discussion leaders include:

On Saturday, Sept. 27, from 1:40 to 3:10 p.m., a plenary session titled “Cities in Revolt!” will look at a range of racial and urban concerns, including policing, racial vigilantism, privatization, and political and economic disenfranchisement. Participants include:

“Borders are being questioned and, in some cases, challenged, everywhere,” said Lisa Brock, Ph.D., associate professor of history at Kalamazoo College and academic director of the Arcus Center. “Globalization and privatization are creating new borders between those who have access to education, food, clean water and those who do not.

“Do all citizens have equal right to participate without threat of a militaristic response?” she asks. “Scholars and grassroots activists working on these questions will address these and other issues facing cities today.”

All activists, artists, students, researchers, and others are invited to attend the “With/Out – ¿Borders? Conference.”

Preregistration is required to attend these events. Registration is on a sliding scale from $35 to $125 and registration closes Monday, Sept. 8. Space is limited, and interested persons are urged to register as soon as possible.

Accessibility and translation services can be made available upon request.

Kalamazoo College (www.kzoo.edu), founded in Kalamazoo, Mich., in 1833, is a nationally recognized liberal arts and sciences college and the creator of the K-Plan that emphasizes rigorous scholarship, experiential learning, leadership development, and international and intercultural engagement. Kalamazoo College does more in four years so students can do more in a lifetime.