If you visit ArtPrize in Grand Rapids, be sure to check out three entries from artists with Kalamazoo College connections. Help Desk Administrator Russell Cooper ’89, Web Services Director Carolyn Zinn ’82 and Visiting Assistant Professor of Art Firth MacMillan all are participating. 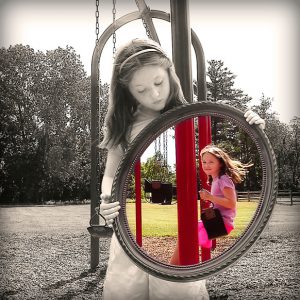 Russell Cooper is competing in ArtPrize for the sixth time. His art shows a black-and-white image of his daughter holding an oval frame at a playground. That frame is reflecting a color image of Violette on a swing.

Cooper is competing for a sixth time at ArtPrize, the event touted by organizers as the world’s most-attended public art event. His two-dimensional work again features his daughter, Violette, although the end result reflects inspirations from photographers and artists who create optical illusions, and the Persian Poet Rumi, who said: “There is a life-force within your soul, seek that life. There is a gem in the mountain of your body, seek that mine. O traveler, if you are in search of that, don’t look outside, look inside yourself and seek that.”

Cooper’s art shows a black-and-white image of his daughter holding an oval frame at a playground. That frame is reflecting a color image of Violette on a swing. The final product is on display at PaLatte Coffee and Art, 150 Fulton St. E.

Zinn is entering ArtPrize for the first time. Her quilt – which is an image of her daughter, Kirsten, that uses 480 hexagons and 60 commercial fabric prints – was designed through a technique called English paper piecing. She said the technique involves wrapping paper shapes in fabric and then stitching the fabric by hand with a thread and needle. The paper is removed before the quilt layers are stacked and topstitched. 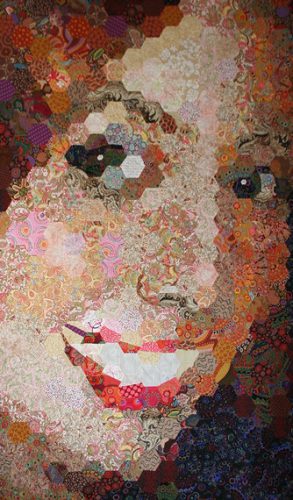 Carolyn Zinn’s quilt is an image of her daughter, Kirsten, that uses 480 hexagons and 60 commercial fabric prints.

Zinn added she has been sewing her entire life, although she became fascinated with geometry and the color of traditional Amish quilts when she was a teenager. She made a quilt for the first time when she was a student at K and living in DeWaters Hall. In recent years, Zinn has become involved in art quilting, focusing on original design and nontraditional materials and methods.

“I believe fiber art is an underrepresented medium in the art world,” she said. “By entering my work in this open competition, I hope to raise awareness of the medium and inspire others who work with fiber to continue challenging the boundaries of art, craft and design.”

MacMillan has been teaching ceramics and sculpture since coming to K from The University of Colorado-Boulder in 2016.

MacMillan became familiar with ArtPrize while living in New York City through art critic Jerry Saltz. When she returned to Michigan, where she attended high school and college, she took her K sculpture class to ArtPrize, and decided that she should enter this year. Her work is being displayed at the U.S. Post Office at 120 Monroe Center St. NW.

MacMillan’s father, a photography enthusiast, was among the first to inspire her to become an artist. “He helped me learn to frame the world outside through the viewfinder,” MacMillan said. 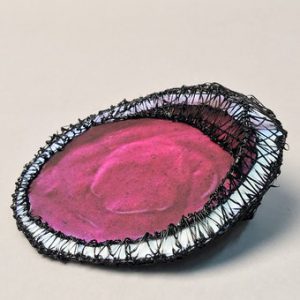 Firth MacMillan’s sculptures, including the pieces presented at ArtPrize, are often three-dimensional representations derived from her photographs.

In fact, her sculptures – including the pieces presented at ArtPrize – are often three-dimensional representations derived from her photographs.

“In my work I reinterpret experiences of pointed yet everyday moments from life like the play of shadows from sunlight filtering through a canopy of trees,” MacMillan said on the ArtPrize Web page showing her work. “I take these ephemeral moments and translate them into three-dimensional form.”

First-round voting continues at ArtPrize through Sept. 30. Anyone attending ArtPrize can vote in the first round for their favorite artist or artwork to win a share of a half-million dollars in cash and prizes. Public attendees vote through their computers after they register onsite or through the mobile app while visiting the ArtPrize district. Mobile app users need to tap the “thumbs up” icon after entering an artist’s five-digit code. Computer voters tap the “thumbs up” icon at each artist’s profile. The five-digit codes are 64719, 64662 and 66515 for Cooper, Zinn and MacMillan respectively.

ArtPrize runs through Oct. 8. Learn more about the event.