Even with modern-day royals generating headlines, Chelsea Miller ’19 would rather focus her attention on a royal who lived thousands of years ago. Miller’s research, first conducted through her junior-year seminar, is applying new theories to the legacy of Akhenaten, who ruled Egypt from about 1353 to 1336 B.C. 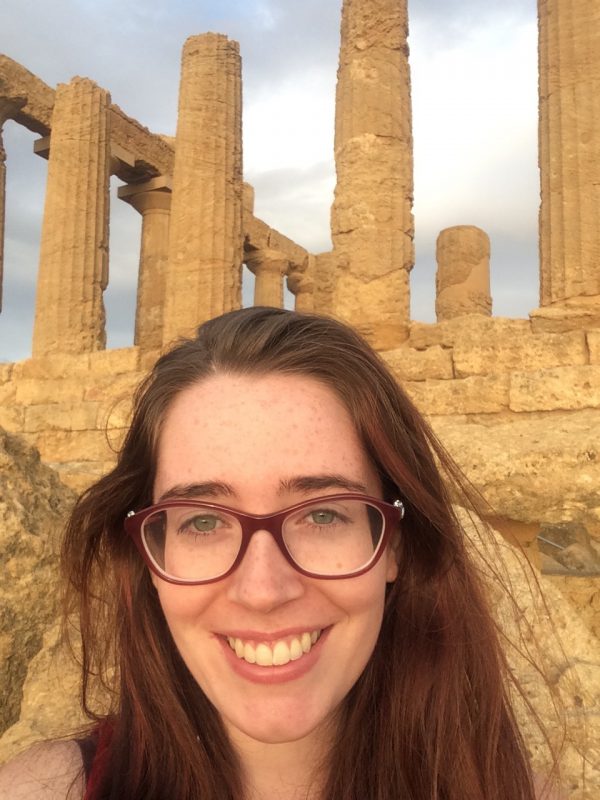 When Chelsea Miller ’19, of Flint, Michigan, began her studies at Kalamazoo College, she thought she would pursue the pre-med program. Instead, she fell in love with the Classics Department, where she studies historical figures such as Akhenaten, who ruled Egypt thousands of years ago.

Traditional belief says Akhenaten suffered from awkward physical conditions such as Fröhlich’s syndrome, a rare childhood metabolic disorder, or Marfan’s syndrome, a genetic disorder that affects the body’s connective tissue. Yet Miller’s research leads to a different diagnosis, even thousands of years after Akhenaten’s death.

“I believe the cause of his behavior was a combination of propaganda and a mental tendency of taking things too far,” said Miller, a classical civilizations major with a concentration in neuroscience. “I believe he had characteristics such as an elevated mood, inflated grandiosity and overactivity. I believe he had egomania.”

That theory, in fact, seems to be supported by those symptoms as found in the Diagnostic and Statistical Manual of Mental Disorders, which mental-health experts in the U.S. use to identify mental illnesses.

“I think the average person would find it a little surprising that we can do such a retrospective diagnosis,” Miller said. “He was such a famous person and he probably had a mental illness, yet there are still stigmas regarding people who have mental illness. I think other people can be drawn to his eccentric lifestyle like I was, and what might’ve been going on inside of his mind.”

“It was an amazing experience,” Miller said. “So many people from very well-respected and well-known schools made me feel proud to be representing K because it shows the kind of work we do here. I think more students at K should know they have opportunities like this. It was very rewarding to present my work and experience other people’s work.”

Miller said Akhenaten was married to Queen Nefertiti and was believed to be the father of Tutankhamun, also known as King Tut. Egypt at the time was a conservative civilization that valued stability and continuity, although Akhenaten rejected many Egyptian traditions that rulers were expected to uphold. He introduced monotheism, for example, to a culture that had worshiped hundreds of gods for many centuries.

Akhenaten also spent great resources founding a new royal capital city, and he adopted a bizarre, androgynous image for himself and his family that violated idealistic Egyptian artistic canon. That image included a grotesquely elongated face that surmounted a tall and thin neck, weak and sloping shoulders, a distended belly and spindly calves.

His decisions, in fact, presumably caused Akhenaten’s subjects to hate him because they posthumously condemned his memory and attempted to remove all mentions of him from historical records. When researchers rediscovered proof of Akhenaten in the 19th and 20th centuries, archaeologists and medical professionals attempted to explain his unusual appearance and radical behaviors in art and history with retrospective diagnoses of physical conditions.

Miller, though, said Akhenaten’s mummy was discovered without any sign of the physical conditions portrayed in images of him, aiding her conclusion of mental illness. She added she hopes her research will lead her to more fascinating ideas about historical influencers.

“I’m interested in looking at other misunderstood figures in history and what they did mentally,” Miller said. “I don’t want to say the Akhenaten story is over for me, but other people have already investigated rulers such as Alexander the Great, and I’d like to go further into that history.”