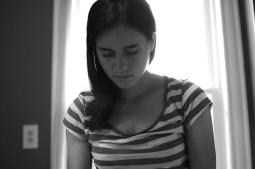 Like many Kalamazoo College alumni, Jillian McLaughlin ’10 is as creative as she is passionate (in her case, about important public policy issues). This fall the public policy graduate student (she attends the John Fitzgerald Kennedy School of Government at Harvard University) collaborated with photographer Peter Rausse to create the “Unsexy Policy Project.”

The project’s goal is to get people, especially people aged 18 to 29, to think about, and act on, policy issues that, stuffy as they may seem, affect millions of people. McLaughlin’s tactic: bring back the “unsexy!” or, put another way, articulate a matter’s gravitas and hitch it to a metaphor generally recognized as “sexy.” In application, this meant combining cheese- or beef-cake photos of some dozen current or former students of the Kennedy School with short, lay-language summaries of a particular issue, such as voter ID laws, tax reform, telecommunication competition, among others. The project took three days to complete and rolled out before the November mid-term elections. McLaughlin and Rausse made a calendar out of the photos and will donate proceeds from sales to an organization selected by the project’s Facebook fans.

Before she started her graduate program, McLaughlin worked as a researcher for the National Consumer Law Center, an advocacy organization dedicated to improving the economic security of low-income individuals and families. At K she majored in political science and was an outstanding cross-country runner. We love her title at the Unsexy Policy Project: “Co-Founder and Chief Mischief Maker.” Very K-like.