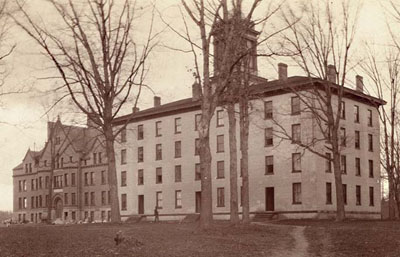 The Men’s Dorm before the fire. Bowen Hall is in the background at left

Like its century-in-the-future counterpart, the class of ’16 (1916!) faced its share of campus crises scattered among the quotidian rhythm of challenge, disorientation, hard work, fun and growth. You can discover these similarities (and differences) from a display created by archivist Lisa Murphy ’98 and currently on exhibit in Upjohn Library.

The class of 1916 graduated 38 members (four with bachelor of science degrees, 34 with bachelor of arts degrees). The students matriculated in 1912. At that time all classes were held in Bowen Hall, located near what is today the east loading dock of the Hicks Center. Bowen housed the library as well. Male students lived in the appropriately (albeit unimaginatively) named “Men’s Dorm.” It was located near today’s Hoben Hall. Women students resided in “Ladies Hall,” located approximately in the center of a triangle whose vertices would one day be Stetson Chapel, Mandelle Hall and Dewing Hall. None of those three vertices existed then. And none of those 1916 landmarks (Bowen, Men’s Dorm, Ladies Hall) exist today.

Despite being 100 years apart, the academic calendar is roughly the same: mid-September to mid-June, though divided back then into two semesters rather than three trimesters. Fourteen faculty worked at K in 1916; three were women. 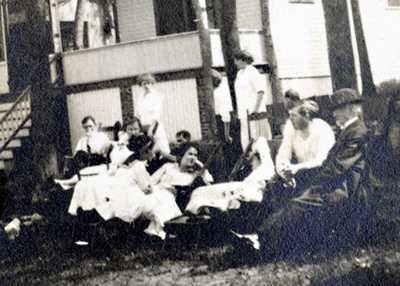 Ancestor to Day of Gracious Living?

According to Murphy, freshmen and sophomores 100 years ago tended to do things as one group, juniors and seniors a second. As freshmen, the class of ’16 distinguished itself in the annual sophomore-versus-freshmen tug-of-war over Mirror Lake, a shallow mucky pond near Arcadia Creek and the Amtrak train tracks. According to a small Kalamazoo Gazette article (headline: FRESHMEN DRAG 15 CLASSMEN THROUGH CHILLY LAKE WATERS), the first-years made short work of the sophomores and pulled them across the entire pond.

Back then juniors and seniors enjoyed an annual picnic at West Lake. The class of ’16 had a chance to attend a senior-only picnic at Gull Lake (see photo, with President Stetson on the far right). Perhaps these events are ancestors to the Day of Gracious Living, which the class of 2016 experienced annually for four years. 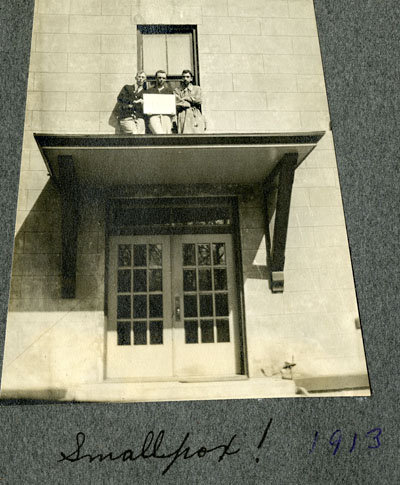 Students confined to the Men’s Dorm take some air

All classes endure challenges. The graduates of 1916 faced smallpox and a serious dorm fire during their four years. In early April of 1913 a junior named Ernest Piper was diagnosed with smallpox. The Gazette headline read: SMALLPOX APPEARS AT COLLEGE “DORM” WEDNESDAY EVENING: Dr. Stetson Orders All Students to be Vaccinated at Once: Glee Club Members Are Scared. Piper had been on a recent trip with the Glee Club. For a few days, the College was “campused,” which meant students stayed in their rooms with the exception of their vaccination appointments. A doctor’s written verification of vaccination (and antibody production) was required to resume classes and other activities. One such verification is on display in the library, with two dates (April 3 and April 30) corresponding (respectively) to vaccination and efficacy (presence of antibodies presumably).

President Stetson took some heat for not banishing Piper to an infectious diseases sanatorium. None existed in Kalamazoo, and the closest one outside the city Stetson considered deplorable. So he stood his ground. It turned out Piper’s was a mild case, as was the only other case, that of a faculty member. The incident occurred before the age of antibiotics and less than four years prior to the influenza pandemics of 1918-19, which killed an estimated 675,000 Americans. Infectious disease was fearsome.

In the class’s senior year, on March 17, 1916, the Kalamazoo College Oratorical Association of Kalamazoo sponsored a debate between K and Hope College. The topic: “That Congress should adopt a literary test as a further means of restricting European immigration.” K had to argue the affirmative; Hope the negative. The debate occurred of St. Patrick’s Day. No record of who won. 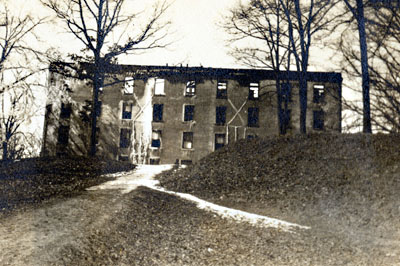 The Men’s Dorm the morning after the fire

Coincidentally, that very night, a midnight blaze destroyed the fourth floor of the Men’s Dorm. All 48 residents of the building made it out; those on the lower floors had some time to salvage belongings, but the students on the third and fourth floors were fortunate to escape with their lives. In a scene right out of Tim Burton’s 1989 Batman movie, the bell from the dorm’s tower fell through the floors, narrowly missing one student who had just fled his room. Wrote The Index (March 21, 1916): “A very narrow escape was experienced by Paul Butler when the old bell, which had hung in the tower for more than fifty years and is well known to every alumnus, crashed through the roof and down to the third floor.  Butler had just left his room when the mass of metal tore an opening in the floor over which he had recently passed.”  Eat your heart out, Tim Burton…though, perhaps, the proximity of place and timing were embellished in the telling.

What’s certain is that local neighbors volunteered to house the newly homeless students, providing clothing and book replacements as well. Lots of homework, even some assignments not due for months, were claimed to have been lost in the blaze.

The night of St. Patrick’s Day was bitter cold. You can see the frozen ice from the water used to douse the flames in the after-photo of the before-and-after sequence. The College declared the fourth floor a loss, and refurbished the building as a three-story structure.

No matter what it may have seemed, not all about the four years was crisis–the same as with the class of 2016. The 1916 baseball team won the conference championship, as would its future descendant 100 years later. The basketball team placed first as well. And 1916 was the year the Kalamazoo College Student Senate formed. Ironically, 100 years later, 2015-16 was the College’s first year since 1916 without a student government.