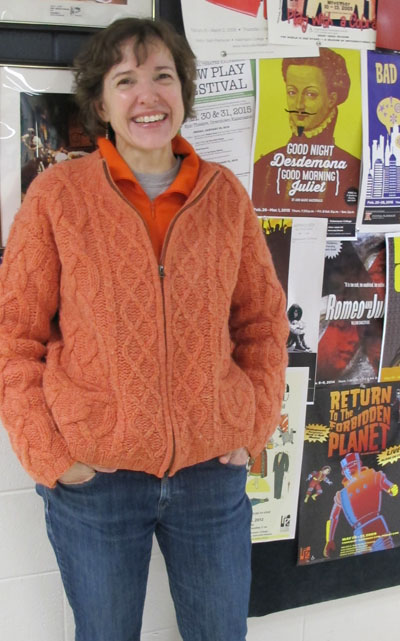 One great outcome of the K-Plan is an aptitude for adventure–one that lasts a lifetime, with a concomitant fearlessness of failure. Take Laura Livingstone-McNelis, class of 1989. The English major, theatre arts minor, LandSea participant (who studied abroad in the United Kingdom) has taught in the public schools, owned and administered a bed & breakfast business and, for the past four years, served as the company manager for the College’s Department of Theatre Arts and Festival Playhouse Productions. Next month you can add to that résumé the title: Playwright.

Laura’s one-act play, “Lost in the Shuffle,” has been accepted by and will be performed during the Seventh Annual New Play Festival at the Epic Center in downtown Kalamazoo. Her play will stage on Saturday, February 4, at 2 p.m.

Laura cites three reasons for her adventure into playwrighting.

“I was intrigued by the New Play Festival’s call for plays and thought, ‘Why not try?'” she says. Actually, the genesis of “Lost” dates back several months before that call. As a member of the Lake Effect Writers Guild, Laura remembers a particular meeting the previous winter. “The assignment was to write something with a ‘bit of dialogue.’ I thought, ‘Here’s my chance,’ and began the first draft of ‘Lost’ in January 2016.” So the metamorphosis of “Here’s my chance!” to “Why not try?” constitutes one of three motives driving our nascent playwright.

The second had to do with the seminal event that inspired the play. Laura explains: “The play is about Alzheimer’s disease and its effect on the patient and the family, especially family caregivers. My stepfather eventually died of the disease. I recall during a visit to my mom and stepfather’s house finding in a desk a box with a harmonica. I was familiar with the harmonica because years earlier my kids had given it to my mom and inscribed on the box ‘Grandma.’ But when I saw the box that day the word ‘Grandma’ had been carefully crossed out, and in the painstaking handwriting of my stepfather was  written instead the word ‘harmonica.’

“Often you cannot see the devastation of Alzheimer’s until its late stages. Those early effects can be hidden. And yet already the disease had stolen from his mind–at least intermittently–the concept of possession. In his mind, the box did not contain a grandma; it contained a harmonica, so he fixed it.”

The hiddenness and drama of that discovery in the desk relates to the third reason Laura wrote her play. “Theatre is a community of inclusion, able to inspire empathy and be an agent for change,” she says. “Theatre brings light to issues hidden beneath our inattentiveness, and the effects of Alzheimer’s disease require more light,” she adds.

Her script development continues through the rehearsal process and in collaboration with the play’s director and actors. “I’ve done five rewrites during rehearsals,” says Laura, “and learned a great deal in the revisions.” In her play, Laura is writing movement as much as dialogue. For example, her staging of “shuffling” acquires multiple layers of meaning in this poignant work, as much poem as performance. Launching an adventure takes teamwork, and Laura is deeply grateful to the producers of the New Play Festival, Kevin Dodd and Steve Feffer, for providing the opportunity for playwrights like her to develop their work. Ed Menta has served as her mentor since her college days. “And my family and friends have enthusiastically encouraged my writing,” she adds.

“Lost” may be just the beginning of her writing career. “I have things to say,” she smiles, “and I’m no longer too intimidated to try.” She’s at work on a family book about the power of love. “It’s meant to be read by parents to children, and it focuses on the extraordinary relationship between my mom and my daughter.” The working title is “A Kiss Across the Miles.”

Who knows, though, its genre may morph to a play. As might her second work-in-progress, a memoir based on a nightly diary Laura has kept for 41 years (seriously!)…every night, with no more than a couple dozen exceptions, since she was NINE YEARS OLD.

“I don’t have a working title for the memoir,” says Laura. “It’s shaping into the arc of a young woman growing up with a set of expectations and then having to manage a life direction that diverges quite radically from those expectations.”

Add to this oeuvre a second version of “Lost.” February’s performance (version one) takes about 12 minutes. Laura will expand that to a one-act play of standard length (40 to 45 minutes). Who knows, maybe one day she’ll make it a full-length play.

In the meantime, Rave on, Laura. And thank you for the courage.