Kevin McCarty ’20 has ambitions of being a doctor. For now, though, the title “newspaper editor” will do. You also could call him a teacher. Or, as Teresa Denton, associate director of the Mary Jane Underwood Stryker Center for Civic Engagement, describes him, “really dedicated.” McCarty is quick to say he’s not seeking any credit for himself. Instead, he says, his goal is to combat a persistent problem at some Kalamazoo public schools: lagging student achievement in literacy skills. 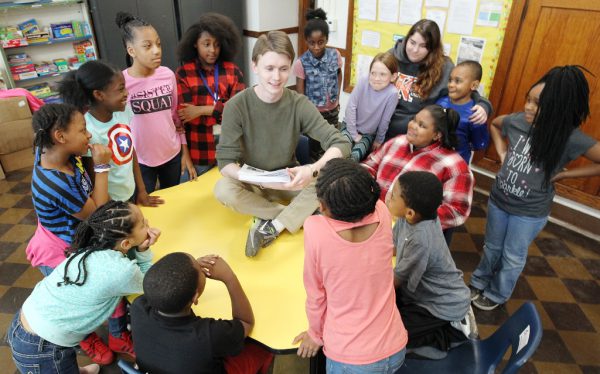 Kevin McCarty ’20 has ambitions of being a doctor. For now, though, the title “newspaper editor” will do as he seeks to help Woodward Elementary students develop literacy skills.

Back home, as a high school student in suburban Detroit, McCarty, a chemistry and Spanish major at K, worked with a program call Kids Standard that sought to improve student literacy skills by helping elementary school children publish a school magazine. After he got to K, he wanted to carry on the work, but the distance was too great to make it practical. So this school year he applied to become, and was accepted as, a civic engagement scholar through the Center for Civic Engagement (CCE), and received a grant from the CCE’s Linda Primavera Fund, created by Primavera ’77, a longtime advocate of civic engagement.

He is working at Woodward School for Technology and Research in the Stuart neighborhood, just a few blocks from the College. Woodward is a Michigan Priority School, which means its elementary-aged students’ achievement and growth is in the bottom 5 percent for the state. Their reading and writing scores on standardized tests, on average, lag far below grade levels.

Empowered by CCE to launch his own literacy skills program to address that issue, and working with Communities in Schools, a Kalamazoo nonprofit that seeks to bolster student achievement, McCarty mapped out a strategy.

First, he served as an editor at The Index to get the skills he needed to design a newspaper. Then he spent his winter break drawing up a lesson plan. It called for forming an after-school club where students, mainly fourth- and fifth-graders, would receive several weeks of training in conceiving and composing stories, then write them for a publication to be called The Woodward Weekly.

“I went back and talked to teachers in my hometown and with Maggie Razdar,” who runs Kids Standard, “and we highlighted areas I should touch on and where I should put the most emphasis,” he says. “I outlined very general areas I needed to talk about, like what is an introduction, what is the body of the story, what is a complete sentence, the parts of speech, when to use commas, because I realized that as I was doing it, how actually complex it is. It made me go back and think of the questions I would have asked as a student and break it down into pieces.”

He used his proposal to secure a $500 grant for printing the paper. Then, twice a week in the winter term, he led the students through creative exercises that targeted literacy skills including having them cut out printed words from local publications and rearrange them to tell their own stories. The capstone was choosing subjects for the Woodward Weekly and researching and writing the stories for the first edition, which debuted this month.

McCarty says he exercised a light touch in the editorial process, letting students pursue their own ideas and express them as they preferred. The results include an “Opinion” page with three stories on the subject of slime and two recipes for making it. Fourth-grader Krysty’anna Craft writes about how she became interested in slime by watching YouTube videos (a common theme in the Weekly), while Kieara Virgil, another fourth-grader and apparently a budding chemist, explains that it is “a unique play material composed of a cross-linked polymer … made by combining polyvinyl alcohol solutions with borate ions.”

“I don’t plan out what they do.” McCarty says. “I want to make the idea of writing and self-expression something that’s completely up to them and their choice. It was anything from poetry to fiction and nonfiction.”

Stories completed and photos gathered, he then faced the hardest part: assembling the newspaper, something he had never done on his own before. It was a lot of extra work, but he says he knew the result — a professional-looking, eight-page newsletter divided into departments and complete with bylines for each writer — was worth it when he saw how excited the students were.

“I don’t know what they were expecting but they were really impressed with the way it turned out,” he says. “When they saw it looked like a real newspaper, they said, ‘I’m famous now!’ ”

More important, he says, they gained an understanding of their own literacy skills and experienced writing as a way to communicate ideas they care about, not as a daunting chore. Tasked with collecting metrics for the program, he could point to measurable success.

“They saw writing as a joyful thing rather than an assignment,” he says. “And they walk away with a better understanding of the process.”

As for the editor, “It was pretty fulfilling,” he says. Other schools in Kalamazoo are now interested in launching similar programs, he says, and he has left copies of the Weekly around K so fellow students can see what’s possible through CCE.

Community engagement scholars conduct a weekly reflection session on their goals and experiences, and McCarty says many of those discussions this winter focused on educational inequality. Given the size and seeming intractability of that problem, running the club and publishing the Weekly “wasn’t a big thing to do,” he says. “But it’s something we can do.”

Applications are open through April 20 for the next round of Civic Engagement Scholarships. The paid positions give students the opportunity to engage in projects like McCarty’s while also providing student leadership for the CCE.