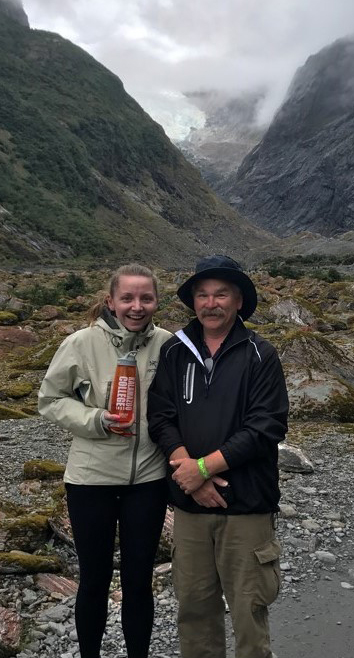 Kalamazoo College alumni never know where their paths might cross.

In early March, Jeff Palmer ’76 and his wife, Susan Andress, were about midway through a month-long trip to Tasmania and New Zealand when they stopped to hike to the Franz Joseph Glacier on New Zealand’s “South Island.”

“It was a beautiful place on a beautiful day and we were taking our time on the roughly four-mile round trip trail,” said Jeff, who recently retired as associate director of communication in K’s Office of College Communication.

“Surrounded by green-sloped mountains, waterfalls, and a glacier bluer than we imagined it would be,” Jeff said “we expected the cast and crew from Lord of the Rings to step out of the mist at any moment.”

Instead, a flash of orange and a familiar logo in the hand of a young man darting past on the trail caught his attention.

“Hey!” Jeff called out. “Where’d you get that K College water bottle!”

The young man stopped quickly and spun around. The young woman running with him did, too.

Holly Gillis ’09 and her husband, Ethan Basset, were toward the end of a ten-day vacation, rushing to see the Glacier before moving on to their next stop. Both are medical doctors working in Houston and soon moving to Ohio.

Holly and Jeff talked a little about their K-Plans (“Mine doesn’t take long to tell,” said Jeff) and some of the K professors and staff they both know on campus. They also agreed to follow up via email once they were back home. [See Jeff’s brief write up below about Holly’s post K career thus far.]

They compared a few New Zealand travel notes and agreed they were “glad to see one of nature’s wonders before climate change and science denial causes it to melt away,” said Jeff.

Susan and Ethan took photos while their alumni spouses marveled at the odds of having an impromptu Hornet gathering in a mountain valley half a world away from K’s “Fair Arcadian Hill.”

With a little help from a K water bottle.

*****
Holly Gillis ’09 is a Madison, Wis., native who majored in chemistry at K. She also sang the national anthem for a range of Hornet home athletics events, wrote restaurant reviews for the Index, sang soprano in the Premium Orange a capella group, served as a co-director of Frelon dance troupe, was the American Chemistry Society Student Affiliate Chair; and volunteered in the children’s ward at Kalamazoo’s Bronson Hospital. She also traveled to Perth, Australia, for her  study abroad, during which she volunteered at the Western Australian AIDS Council, working on a needle exchange program and youth risk reduction programs.

After K, Holly earned a medical degree from Geisinger Commonwealth School of Medicine in Western Pennsylvania and completed her residency in pediatrics at the University of Minnesota Masonic Children’s Hospital.

She and Ethan were married in July 2016 and have been living in Houston this past year “learning and working” at Texas Children’s Hospital, she said. He is completing his pediatric otolaryngology fellowship, while she works in the emergency department and serves as assistant professor of pediatrics.

Next up for the couple is a move to Columbus, Ohio, “learning and working” at The OSU Nationwide Children’s Hospital.

Ethan will join the pediatric ear-nose-throat clinical and academic faculty, while Holly starts a fellowship in pediatric critical care. She intends to focus on the disparate access to quality health care that low income children with complex medical needs have within a pediatric hospital system compared to those with middle and high incomes.

“K study abroad shaped the way I think about medical practice and empathy for low and very low income women and children,” Holly said. “The service component to my study abroad program–a health screening project in a low-income suburb of Perth with primarily aboriginal women and children–helped expose the bubble that is so convenient for many of the economically stable K students to live in, including myself.”

Study abroad also fueled Holly’s interest in travel, particularly to the lands Down Under. She traveled to Sydney, Australia, during the summer after her first year of medical school to work in a lab related to research she conducted for her K Senior Independent Project, or SIP. (Professor of Chemistry Laura Furge served as Holly’s on-campus SIP faculty mentor for the reading of her thesis.)  A recent vacation to New Zealand with Ethan was a respite from work and studies before they finish their assignments in Houston and pack for the move to Ohio.

She looks forward to being a little closer to her Wisconsin and Kalamazoo College homes, and hopes to cross paths with K alumni.

TEXT AND PHOTO BY JEFF PALMER ’76