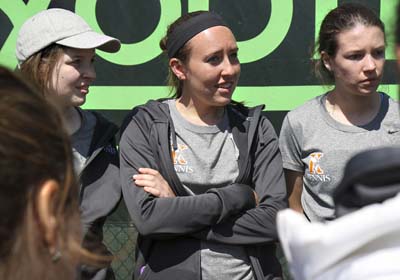 Senior tennis player Katie Clark ’16 would be lying if she said she wasn’t nervous or scared when she decided to jump ship from Fairfax, Va., after high school and attend Kalamazoo College.

But before she left, a close family friend gave her peace of mind and a thought that’s stuck with her to this day.

“This part of your life isn’t dying, your circle is just getting bigger,” the friend told her.

Clark’s circle has expanded exponentially since stepping on campus.

“Honestly, I didn’t know I was going to be happy here until I showed up the first day,” Clark said. “It was a little different that someone from the East Coast would go to this little funky school in Michigan called Kalamazoo. But I remember pulling up to campus and thinking ‘Oh, it’s actually so beautiful here and everyone seems really nice and maybe I’ll like it.’

“Turns out, I’ve always enjoyed it.”

Leading on and off the court
As an athlete, Clark’s circle grew quickly as she became immersed in the women’s tennis family, but she was also introduced to another area on campus because of her involvement with tennis.

“Two or three years ago my coach recognized that women’s tennis had never really played that significant of a role on the Athletic Leadership Council, so he recommended I start attending,” Clark said. “It was a really good fit because the goals and work that ALC does very much align with my personal reasons for wanting to be a student-athlete.”

Clark, ALC’s active secretary, said her time with ALC helped her establish her identity beyond “student” or “athlete.” The organization allows her to simply be a part of the Kalamazoo College community.
“ALC engages student athletes with community work such as working with Special Olympics, but it also creates and hosts events for the entire campus.”

As a senior member of ALC and the tennis team, Clark is excited to be able to help shape the culture of the campus and her team.

From the court to Congress
A history major and a political science minor, Clark secured an internship with Senior United States Senator Charles Schumer in the summer of 2014 on Capitol Hill. 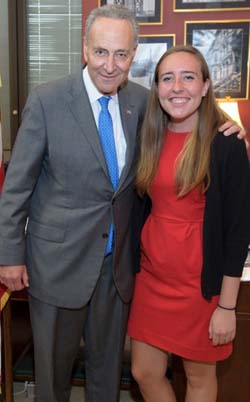 When she arrived in Washington D.C. she learned her work would be primarily left up to her to figure out.

“Instead of the internship being very structured, it really was what you made out of it,” she said. “That’s one of the more valuable things I took away from my experience.

“Throughout my education, ever since kindergarten, people just give you things to do all the time and that’s a very easy thing to get accustomed to. On the other hand, working to find work for myself was  new to me.”

Her assigned tasks included fielding calls from constituents, answering questions about policy in a cordial manner, organizing the mail and also giving tours of the Capitol Building. Her most valuable experience came from the work she assigned herself.

“I would find senatorial briefings on my own and would go talk to the responsible staffer to ask if they wanted me to write a memo and do research on the subject.

“A lot of times the staffer wouldn’t actually need the memo, but the interaction was about establishing the connection and having them realize that you want to be there. When they actually did need help with something significant they knew that I was well versed in that subject.”

She enjoyed the experience, and the feeling was mutual–Clark returned to the same position the following summer. 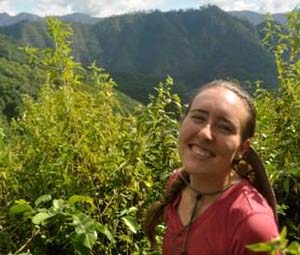 Thailand is a place many people never see in their lifetime, but Clark’s circle stretched across the globe when she decided to experience the country and culture during the fall and winter terms of her junior year.

Clark didn’t want to just be a student in an unfamiliar environment; she wanted to immerse herself within a community and learn from people with vastly different understandings of life.

“My program was predominantly experiential-based learning, so other than the first six weeks we were in the field the entire time,” she said. “We spent most of our time in host villages living and learning from different members of the community.”

The days’ events and tasks ranged from meeting with government officials and local business men and women, to helping families clean their roofs and taking children to school. The topics of discussion ranged from overfishing to gender and religion.

“I wanted to be enrolled in a study abroad program that would give me something I wouldn’t be able to get on my own,” Clark said.  Turns out that “something” was a deep connection to “communities and very rural areas in the mountains in northern Thailand.”

Growing beyond graduation
Using the experiences she’s had and the connections she’s made during her three and half years at K, Clark hopes to continue lengthening the radius of her circle as she begins to prepare for life after Kalamazoo.

“I have so many different areas of support here at K. School is something that I really value and enjoy. For my professors to be able to push me to be the best student I can be is special.
“Instead of just telling me ‘good work’ sometimes my professors will tell me ‘you can do better than this.’”

With her senior tennis season surely at the front of her mind and set to get underway in less than a month, her goal after graduation is to join the Peace Corps.

It’s safe to say–and Clark has no doubt–that wherever her path leads her next, she’ll be well-prepared.