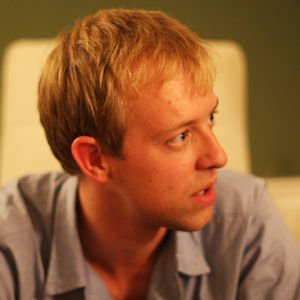 Jason Kohl ’06 shows his award-winning film “The Slaughter” at Kalamazoo College, Tuesday, April 22 at 7:00 p.m. in Light Fine Arts Recital Hall. Sponsored by Kalamazoo College Media Studies, the film is free and open to the public.

Michigan-born Jason B. Kohl is an Austrian/American Filmmaker. He got his B.A. in creative writing from Kalamazoo College in 2006 before moving to Berlin, Germany on a Fulbright Scholarship. In 2012 he got his MFA in directing from UCLA Film School in Los Angeles.

His UCLA MFA Thesis Film “The Slaughter” premiered at the 2013 South by Southwest Film Festival in Austin, Texas and was a finalist for the Student Academy Awards. It continues to play festivals like BFI London, Locarno, and Ann Arbor. Filmmaker Magazine called it “a masterfully directed story.”

The short film stars “Breaking Bad” actor Michael Shamus Wiles, and is about a pig farmer who tests his unemployed son’s determination to join the family business.

Jason’s been a finalist or semifinalist for several prestigious labs including the Sundance Screenwriters Lab, the Torino Film Festival’s Adaptlab, and the Nantucket Screenwriters Colony.

He’s an alumnus of the Locarno Filmmaker Academy and a curator for Short of the Week, the premiere online destination for short films.

From 2012-2013 he returned to Berlin to complete postgraduate directing studies at the German Film and Television Academy as a DAAD Artist Study Scholar. He remains based in Berlin, where he is developing various feature projects.

Jason does for hire directing work with his partner Nora Mandray. As Mako Film, their clients include MSNBC, Etsy and Vocativ.

His first nonfiction book, a practical guide to film school, will be published by the Focal Press in 2015.

Read more about Jason and see clips from his work here: http://jasonbkohl.com.