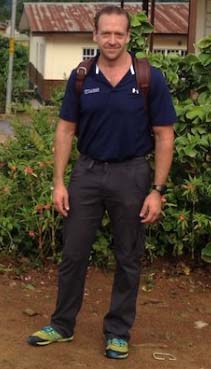 Greg Raczniak ’96 is working in Sierra Leone as part of the Ebola response team of the Centers for Disease Control and Prevention (CDC). The U.S. Navy veteran serves as a preventive medicine resident at CDC. His work in Sierra Leone involves contact tracing (finding and monitoring people who have come in contact with persons displaying symptoms) a key tactic in controlling infectious disease epidemics. An article on Greg appeared in Task & Purpose, a news site for veterans, by veterans. Greg majored in biology at K and studied abroad in Muenster, Germany. He was a standout swimmer on the Hornet Men’s swim team. After graduation her earned his medical degree at Eastern Virginia Medical School and a doctorate in molecular biophysics and biochemistry at Yale University. He entered an internship program at the Naval Medical Center in San Diego, followed by a tour at the Navy’s research station in Ghana. During his service with the Navy, Greg obtained certification in tropical disease and traveler’s health, and decided to complete training in undersea and submarine medicine. Greg is completing a master’s in public health at Tulane University as part of his medical residency in preventive medicine. Nor is he the only K graduate working in Africa to help contain the Ebola epidemic. Paloma Clohossey ’11 is in Monrovia, Liberia, part of the U.S. government’s Ebola Disaster Response Team in that country. Paloma works for the United States Agency for International Development and has lived and worked in Africa often, beginning with her study abroad experience in Nairobi, Kenya. Liberia and Sierra Leone are the two countries where the outbreak of the virus has hit the hardest.