The Engaged Campus of the Year Award recognizes an institution of higher education for exemplary commitment to the education of students for civic and social responsibility; genuine and sustained investment in community relationships; and a commitment to service learning and civic engagement opportunities for students across all disciplines.

In particular, the award is a tribute to the work of the College’s Center for Civic Engagement. Through service-learning courses and student-led programs, the CCE has engaged more than 5,500 K students in long-term, reciprocal partnerships to foster academic learning, critical problem-solving, and a lifetime of civic engagement while strengthening the community. “The students have worked with thousands of community residents, some 50 different organizations, and in more than 30 different community-based courses,” says CCE director Alison Geist. 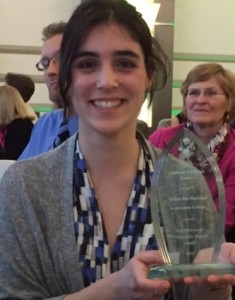 Kalamazoo College also earned an MiCC Innovations in Community Impact award for its program Swim for Success (SFS). The Innovations Award recognizes creative and measurably effective approaches to community problem solving. SFS is a swimming program for local children that takes place on K’s campus three evenings a week. It is a partnership between K and the City of Kalamazoo led by Civic Engagement Scholars Kevin Ewing and Mallory McClure. More than 20 K students are involved as tutors or swim coaches in the program. Kevin and Mallory are both members of the college swim team and are also coaches in the SFS program. K students also provide tutoring onsite one hour before swimming lessons begin. 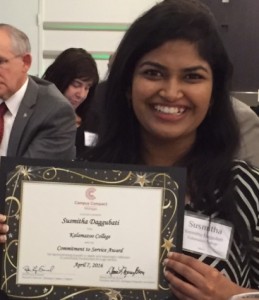 Michigan Campus Compact is a coalition of college and university presidents who are committed to fulfilling the public purpose of higher education. The organization promotes the education and commitment of Michigan college students to be engaged citizens.