Thirty students known for their invaluable contributions to the Kalamazoo College community were honored Friday at the 15th annual Senior Leadership Recognition Awards. 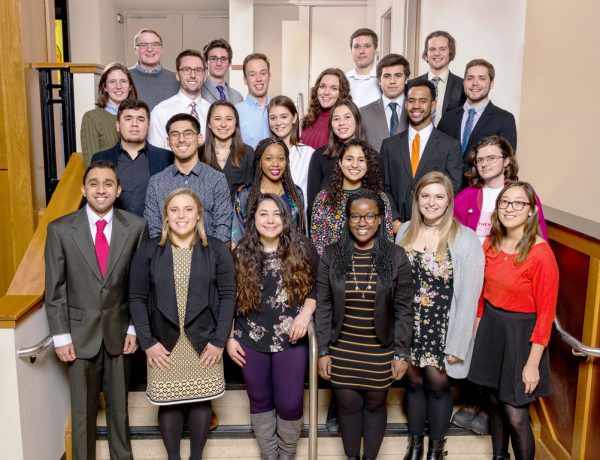 The selection committee, consisting of Associate Deans of Students Karen Joshua-Wathel and Dana Jansma, asked faculty and staff through a letter in December to nominate students, while noting an exemplary nominee isn’t necessarily the “team captain” or “organization president.”

“The individual may be the person who always seems to have a positive attitude, is consistently involved in helping a group move forward, serves as a continual role model to other students, and who shows dedication, even in times of adversity,” the letter said.

Here are the honorees along with brief statements from their nominators:

“Hayleigh is a third-year softball team captain, which speaks to her natural leadership ability and how much her teammates look up to her. … She is the person who connects every person on our team.”

“Lauren is one of the strongest students with whom I’ve had the opportunity to work.”

“Max is a very strong and committed student. … The regularity and quality of his contributions to classroom discussions are unmatched.”

“More than any other player, I can rely on Jake to do the right thing and encourage others to be their best.”

“Molly is an exceptional individual excelling in the classroom, on the soccer field and internationally. She is diligent, generous, intelligent, selfless and kind.”

“K is a better place because of Alex’s leadership as a [resident assistant], a [teaching assistant] in computer science, and as a mentor.”

“As a third-year [resident assistant], Tapiwa’s contributions have been invaluable. … Her authentic servant leadership has been an incredible asset. … As a Civic Engagement Scholar, she brings deeply informed and compassionate perspectives.”

“The scope of Qynce’s mentoring, leadership and initiative is notable, … a distinct example of living an authentic, undaunted existence.”

“He uses his position to advocate for those without a voice.”

“Emma’s combination of quiet confidence and a genuine desire to help others has enabled her to effectively lead a diverse group of peers as president of [the Kalamazoo College Council of Student Representatives].”

“Ian has done fantastic work serving on student government since his first year and has taken on key roles throughout.”

“Sarah is an extraordinary individual excelling at K in the classroom, on the soccer field and in the community.”

“He works respectfully to build a more accepting, inclusive community.”

“Sabrina has been a leader/mentor of the [American Chemical Society] student group since her sophomore year.”

“Joy stands out as a leader, from the roles she has held to the manner in which she conducts herself and encourages others.”

“Nick is one of the top ambassadors for K and the [Michigan Intercollegiate Athletic Association (MIAA) ]. … He’s a two-time co-captain of the golf team and will finish his career as one of the top three Hornet golfers of all time.”

“What makes Ian stand out beyond being a strong student is the degree to which he commits not only to his personal growth, but also the broader community.”

“Hannah is a two-year captain of the lacrosse team and a fantastic leader…she is the first player to offer assistance to younger players on and off the field.”

“He has been instrumental in launching lacrosse at the College and he was our first All-MIAA selection in program history.”

“Amanda is a dedicated leader in the classroom, on the basketball court, on the lacrosse field, and in the community. … She co-founded Sports Business Club. … She is a tenacious go-getter who sets an example of excellence for other students.”

“She embodies the sort of inclusive, cooperative leadership that we need in the world.”

“Marco demonstrates commitment, fortitude and perseverance in all that he does. … He is gifted and the longest serving research assistant I had over my 16 years at the College.”

“Shivani always comes to the table with a positive disposition, a genuine care for others, and a strong desire to make things better.”

“While always acting with integrity, she found ways to encourage others to expand their thinking and learn more about themselves.”

“Sharif sets an example of dedicated and self-motivated learning … He is bright and is among the best writers we’ve ever seen.”

“Regina is a professional, thoughtful student leader and our entire career development team appreciates her positive demeanor, facilitation skills, and willingness to represent the department.”

“Allen pushes his teammates to do the little things to be outstanding student athletes.”

“Jordan had flourished and become one of our top academic, athletic and leadership examples we have in the baseball program. … As a President’s Student Ambassador, he is gracious and possesses an outstanding attitude.”

“Jay is the epitome of the type of enlightened leaders we hope all K graduates become. … She created the Kalamazoo Dance Team and is a leader in student activities. … She is a unique combination of dedication, perseverance and optimism.”