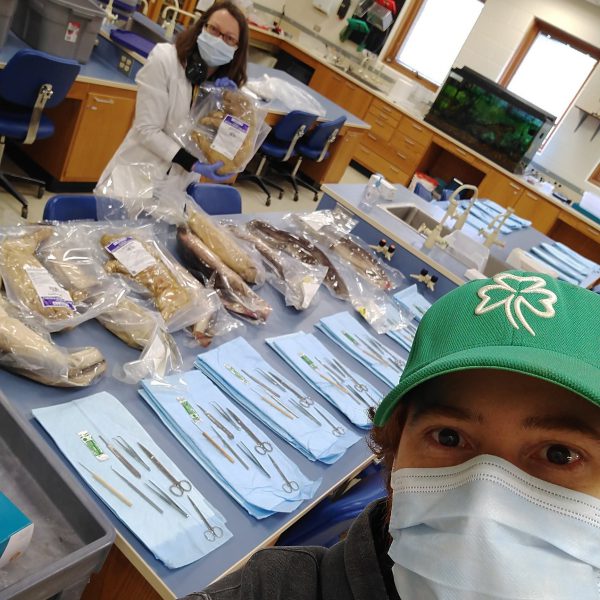 Assistant Professor of Biology Santiago Salinas prepares dissection materials that will be sent to students participating in distance learning this term.

When Assistant Professor of Biology Santiago Salinas learned that Kalamazoo College would be transitioning to distance learning for the spring semester, he knew how he felt. “I was bummed,” said Salinas. Without meeting face-to-face in a classroom or lab, how would his students connect? How would they grasp the hands-on skills they would traditionally experience in a face-to-face classroom, like animal dissection and model work?

“I needed to pump myself up for the quarter,” Salinas said. Internet research yielded inspiration, and soon Salinas had created a movie trailer for his vertebrate biology class — complete with atmospheric soundtrack and compelling narrative voiceover.

Salinas sent the trailer to his class. “I was honest with them, as I usually am in class anyway, and I told them I was having a hard time concentrating,” Salinas said. “I explained that I was bummed out that we wouldn’t be meeting face to face.” His students responded positively, sharing that the trailer had motivated them and made them laugh. When Salinas posted the trailer to Twitter, the outside world responded similarly. That feedback and connection re-energized Salinas as he moved forward with further classroom innovations.

“Twitter has been great for ideas,” Salinas said, describing how his search for inspiration and distance learning materials caused him to reframe his approach. He now sees himself as a curator. “There’s a lot of stuff out there — videos that are so much better than anything that I could put together, supplementing my slides and narration,” Salinas said.

Now, Salinas has high hopes for his vertebrate biology class. “This is forcing me to think about how I do things, and how I decide to prioritize content. Sometimes it’s good to be shocked because you start to reassess things,” Salinas said. “For the students, my hope is that they realize that they are not at K for the grades. I hope they recognize that they are driven intrinsically by what they are interested in, because they are, and that they do biology because they enjoy it.”

Salinas said that he has intentionally encouraged his students to provide feedback regarding biology-specific skills they would like to learn. When most of his students expressed interest in improving their grasp of scientific writing, Salinas quickly adjusted his assignments accordingly. “Maybe this wasn’t something we would cover in a normal quarter,” Salinas said, “But I think it’s going to make for a better course, and a better course for next year.”

As for Salinas’ earlier worries about dissection? “Well, I just finished packaging frogs, sharks, pigeons, and other critters. I will be mailing them out to our young biologists and we’ll do the dissections remotely!” Salinas said.