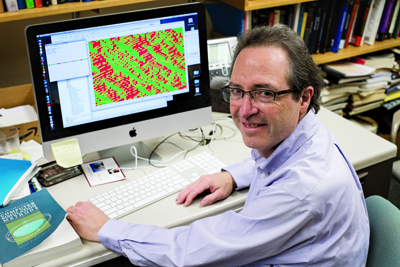 Statistical physicists like Jan Tobochnik rely heavily on computers to explore anything and everything that has lots of parts.

Jan Tobochnik, the Dow Distinguished Professor in Natural Sciences,  has been named as the 2017 recipient of the prestigious Hans Christian Oersted Medal, presented by the American Association of Physics Teachers (AAPT). The Oersted Medal recognizes outstanding, widespread, and lasting impact on the teaching of physics. In connection with the award, Tobochnik will deliver a talk on “The Changing Face of Physics and the Students Who Take Physics” at the 2017 AAPT winter meeting in Atlanta, Georgia. Past winners include Carl E. Sagan, Edward Purcell and Richard Feynman, among others.

Jan’s research interest fall in the area of statistical physics, the  development of computer models that predict behaviors, not only of physical phenomena (like earthquakes and nucleation) but also social situations, such as wealth distribution patterns and traffic jams. Because Jan incorporates his research into his teaching, students get a better sense of what science is all about. “Without my research,” he says, “my examples would be stodgy.” In fact, the award specifically cites Jan’s “lasting impact on the teaching of physics through his contributions to the use of computer simulations to motivate active learning.”

Jan is well known for his series of texts (six) written with Harvey Gould. They cover computer simulation methods at the introductory level and statistical and thermal physics at the intermediate level. In the early 1990’s he was a practitioner of active learning methods, long before it became fashionable, and was busy developing software to assist student learning. Jan’s fluency in computational methods especially in the service of advanced thermal and statistical physics research has informed dozens of publications in refereed journals. He served as the editor for the American Journal of Physics from 2001 to 2011.

Jan came to K in 1985. In addition to teaching in the physics department he has served as acting provost and interim provost. And every year, in the spirit of the liberal arts advocate that he is, Jan leads discussions on the year’s Summer Common Reading selection, none of which, as yet, have been about physics.