Each year, up to $100 billion worth of harvested food is lost worldwide to pests and microbes. A Kalamazoo College student’s research could hold part of the solution. 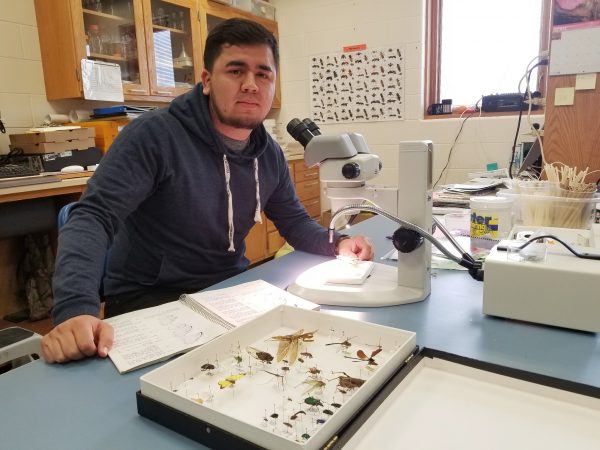 Marco Ponce ’19 examines insects through a microscope at Dow Science Center. He will attend Kansas State University with an NSF Graduate Fellowship beginning this fall.

“Prior research has found that these beetles release some pheromones that make them come together in groups, and others that trigger them to spread out,” Ponce said. As a result, “we wondered how their density affects their behavior when they look for food. We’ve found the beetles responded less to otherwise attractive food cues when they’re grouped in higher densities, so we’re trying to synthesize the signal that turns off their food-finding behavior and use it as a repellent. Our goal is to figure out how to use their biology against them.” 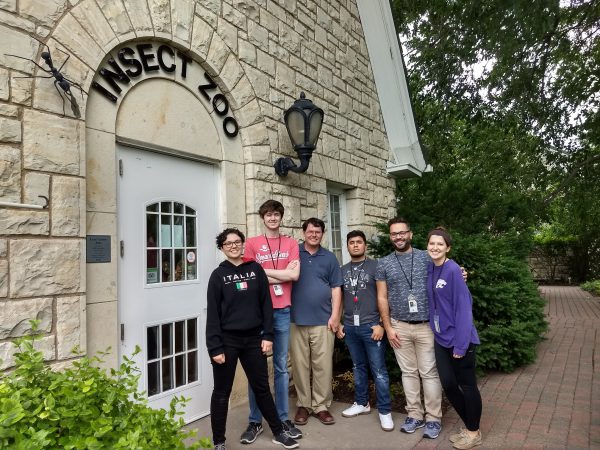 Marco Ponce ’19 (third from right) stands with Rob Morrison, Ph.D., ’06, (third from left) outside the Insect Zoo at Kansas State University. Ponce will attend Kansas State through an NSF Graduate Fellowship this fall.

Ponce learned last week that he earned a National Science Foundation Graduate Fellowship to attend Kansas State University as a graduate student this fall, meaning he and Morrison will conduct more research beginning in July. The two will study how stored-product beetles and microbes interact to ruin harvested grains.

“Every year after harvest, we lose anywhere from 10 to 30 percent of our food commodities,” Morrison said. In addition to the U.S., “if you look at some developing countries, this means about $100 billion in commodities are lost every year. Marco’s project has global ramifications. If he can find some of the attractants useful for (pest) management, that will go a long way toward ensuring less pest damage and making agriculture more sustainable.”

Ponce is the second Kalamazoo College student in as many years to earn a prestigious NSF Graduate Fellowship.

“When he was selected, he was up against some students who already are in their graduate programs,” said Biology Professor Ann Fraser, Ponce’s academic adviser. “It’s always gratifying to see students take an interest in science, even if they just make a hobby out of it. But it’s especially rewarding for me to see students go into entomology. There are so many opportunities to get involved in entomology because insects affect our lives in so many ways.” 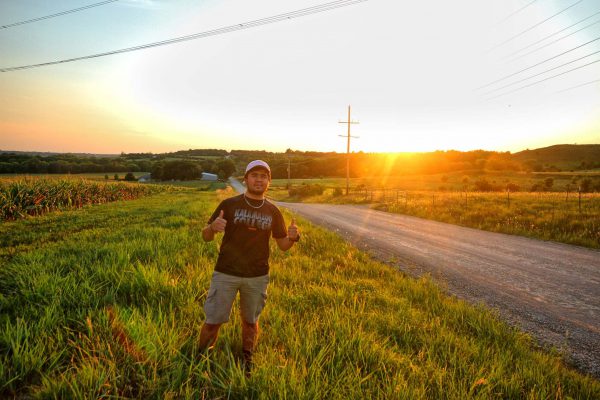 Ponce and Fraser got to know each other when Ponce was reconsidering his pre-med path. His classes helped him realize he could seek other opportunities in science, and he found the best opportunity in Fraser’s entomology lab.

“That was the transition for me,” Ponce said, admitting his first year at K was difficult, especially as English was his second language, having grown up primarily in Tijuana, Mexico. “I considered changing majors until I saw the email from Dr. Fraser inviting me into her lab. I was surprised because I wasn’t the best academically at the time. It’s one of the reasons why I’m still here: I found my passion.”

Ponce first performed research in Fraser’s lab with painted lady butterflies, a species common in all climates throughout the world. His work analyzed how their antennae responded to different odors produced by flowers compared to those produced by potential predators such as ants, and Fraser was thrilled with his work.

A college track, though, wasn’t always in Ponce’s view. At one point, Ponce expected to join the work force immediately after high school when Pablo Roncoroni, his high school teacher, took him under his wing and helped him navigate the college application process. As a result, not only did Ponce find K, but so did five other students from that high school who since have followed in his footsteps.

The support of teachers and mentors has led Ponce to a place where his research and passion can benefit others around the world including in his backyard. As co-founder of the College’s Entomology Club, he’ll soon start working with that group to inspire students at Kalamazoo’s El Sol Elementary, with a goal of introducing students to science in a different, more hands-on way.

“Marco is very creative,” Fraser said. “I invited him into my lab because he is such an original thinker and he has a great science mind. He is a real ambassador of science.”