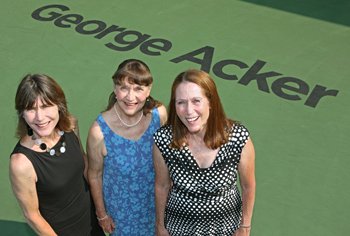 On Saturday, August 2, Kalamazoo College named center court of Stowe Stadium “George Acker Court,” dedicating it to the memory of the legendary coach and teacher who touched the lives of so many K students and Kalamazoo community members. President Eileen B. Wilson-Oyelaran delivered a moving address, which is published below.

“Tonight we are pleased to honor the late Coach George Acker, a teacher and mentor who believed in the potential of others, and had a profound influence on the lives of many.

“George was dedicated to Kalamazoo College for more than five decades (1958-2011). His legendary 35-year career ranks him as the most successful men’s tennis coach in NCAA Division III history. In the Michigan Intercollegiate Athletic Association (MIAA), he is ranked first among coaches for all sports (men’s and women’s) with the most conference championships. Coach Acker’s tennis teams won seven national championships and 35 MIAA championships. He was twice named NCAA Division III Tennis Coach of the Year and was also named NCAA Division III Tennis Coach of the Decade for the 1980s. Coach Acker ranks fourth in the nation among all Division I, II, and III tennis coaches with the most NCAA titles.

“Coach Acker had a far-reaching presence on the campus of Kalamazoo College. Although tonight we are focusing on his tennis accomplishments, it is important to acknowledge that George also taught physical education classes and coached football, wrestling, and cross-country. He coached and mentored more than 600 student-athletes on 65 different teams during his storied career at K. He earned respect and admiration because he was hardworking, humble and honest, and, he valued everyone equally.

“It is fitting that we should honor Coach Acker at the opening night of the USTA Boy’s 18s and 16s National Tournament. Coach Acker played an integral role in this tournament, serving for more than fifty-one years (1959-2010) in a variety of roles including: referee, athletic trainer and umpire, tournament official, and tournament administrator. In 1983 his contributions were recognized when he was awarded a Green Jacket. In 1993, he was declared Honorary Referee. Always available to provide wise counsel and an historic perspective, Coach Acker was an active member of the Kalamazoo USTA Advisory Board from 1998-2011, a total of 13 years. Coaches, players and the tennis community all recognize that the NATS at the Zoo is the best junior tennis tournament there is. There are many reasons for this, and one of those reasons is the commitment of George Acker.

“Tonight we honor this coaching legend and say ’thank you’ for his many contributions to the sport of tennis. We are delighted to have several members of the Acker family with us tonight, including Nancy Acker, affectionately known as ’Mrs. Coach,’ and daughters Gigi Acker and Judy Acker-Smith. We also have more than 175 former players and friends of the family with us this evening. Your attendance tonight speaks volumes about the profound impact George had on the lives of so many.

“And now, it is my distinct honor to announce to all of you that from this day forward center court at Stowe Stadium will be known as the George Acker Court.”