Brockington’s wife, Cathy, donated funds to ISDSI in his name after he died Aug. 10, 2015. The institute at the time was building its new campus in Chiang Mai, Thailand. Those funds were applied to the library as a fitting way to remember him and his wife, who is a former librarian. 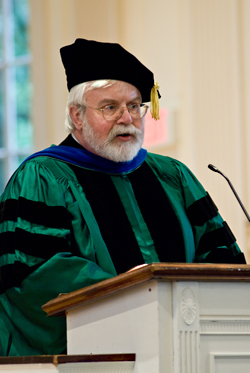 ISDSI developed in 1998 as a result of Brockington’s work. Today, it teaches American students about the key issues of sustainability through a close collaboration with its local communities. The program has welcomed more than 600 students from more than 50 colleges and universities in the U.S.

Brockington earned his bachelor’s degree, master’s degree and Ph.D. from Michigan State University. He began his career at Kalamazoo College in 1979 as an instructor in German language and literature. He was recognized internationally as a safety- and risk-management expert in study-abroad programming.

During his career, he served in various positions of the National Association of Foreign Student Advisers (NAFSA), an association of international educators, including as a chair of the Section on U.S. Students Abroad and a member of the International Education Leadership Knowledge Committee. Brockington also served as a member of the founding board of the Forum on Education Abroad.

Brockington published and presented several papers on modern German literature as well as a variety of study-abroad topics, including orientation and re-entry, international programs administration, and campus internationalization. He led best-practices workshops in legal and risk-management issues and co-edited the third edition of NAFSA’s “Guide to Education Abroad for Advisers and Administrators.”

During Brockington’s tenure, K sent students to countries such as China, Japan and India in Asia; Kenya and Senegal in Africa; Ecuador, Costa Rica, Chile and Mexico in South and Central America; and Greece, Hungary, Denmark, Italy, France, Spain and Germany in Europe.

As a result of Brockington’s professional efforts, most K students study a foreign language and live with host families while participating in an individualized cultural research project that requires them to explore a community, participate in a service project, and write a report about the experience. “The goal,” he once said, “is to help the student look at other cultures, other peoples, and say ‘we’ instead of ‘they.’ ”