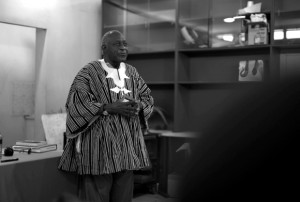 Shortly after the first news reports of an attack by armed assailants on the Westgate Mall in Nairobi, Kenya on Saturday Sept. 21, Kalamazoo College administrators received word from the resident director of the K study abroad program at The University of Nairobi that all eight K students in the program were safe and had been instructed to shelter in place with their host families. The students had been in Nairobi for about five weeks at that time.

Two days later, as the mall attack continued, the College offered its students three options: continue the program in Kenya, as scheduled; return to the U.S. immediately and enroll in winter quarter classes at K in January; or return to Kalamazoo immediately and enroll in classes for the fall quarter that had begun Sept. 16. Three students chose to return to K and are now enrolled in fall courses. Five students chose to remain in Nairobi and continue with the program.

K currently has two visiting international students from Kenya on campus for one year. With help from the College, these students were able to contact their immediate family members and learn they were safe and unharmed. K’s longtime resident program director in Nairobi, Lillian Owitti, reported that her family was also safe. She and the visiting students from Kenya, however, have extended family members and friends that were killed, injured, or lost their livelihoods when the mall burned and collapsed.

This senseless and violent attack on innocent civilians has thus far claimed the lives of nearly 70 people, and the livelihoods of countless more. The entire Kalamazoo College community mourns this tragic loss.

The K community also mourns the death of Kofi Awoonor, Ph.D., a lecturer and visiting professor at K in the early 1970s, who was killed during the opening moments of the mall attack.

A teacher, poet, author, and former Ghanaian diplomat, Awoonor was attending the Storymoja Hay literary festival in Nairobi when he visited the Westgate Mall with his son, Afetsi, shortly before the attacks. Afetsi was wounded, but is recovering.

“Kofi Awoonor was a statesman, a poet, and a man of great courage,” said Kalamazoo College President Eileen Wilson-Oyelaran who became familiar with Awoonor and his work in 1970 when she studied at the University of Ghana in Legon where Awoonor taught.

“African poetry has lost an elder statesman, a role model and mentor to so many.” Wilson-Oyelaran read an excerpt from Seamus Heaney’s poem “The Cure at Troy” in Awoonor’s honor at the all-faculty meeting on the K campus two days after his death.

Awoonor visited Kalamazoo several times in the early 1970s, lecturing and teaching at both Western Michigan University and Kalamazoo College. He taught a course on African literature at K.

“That course changed my life,” Gail Raiman ’73 said recently, upon learning of Awoonor’s death. “It was rich with strange and scintillating imagery and a profoundly different approach to writing and to life.”

Awoonor’s book of poems Night of My Blood and his novel This Earth, My Brother (both published in 1971) were especially memorable, according to Raiman.

“None of us previously had this informed and incredible access to African literature, nor the benefit of having one of Africa’s top literary figures as our teacher. We had no idea how lucky we were.”

Raiman said she followed Awoonor’s career after he returned to Ghana, where he was imprisoned by the country’s military government and, after his release, became a diplomat, continuing to write and inspire.

“It was with profound sadness that I learned of his death,” she said. “May we continue to be challenged and inspired by his many gifts.”

Two other writers with strong connections to Kalamazoo College were also in Nairobi attending the same Storymoja Hay Festival during the attacks.

Writer and photographer Teju Cole ’96 wrote in a Sept. 26 blog post for The New Yorker that he was on stage at the festival taking questions from the audience during the first hour of the mall siege, unaware of what was taking place about a mile away. Two days later, Cole attended an impromptu memorial for Awoonor and read Awoonor’s short poem, The Journey Beyond.

“The most resonant moment of the evening was the least anticipated,” wrote Cole about the memorial. “Someone had made an audio recording from the master class that Awoonor had given at the Festival on Friday.” Cole wrote that the audience listened to Awoonor talking “with both levity and seriousness” about death and dying.

“At seventy-nine, you must know—unless you’re an idiot—that very soon, you should be moving on. An ancient poet from my tradition said, ‘I have something to say. I will say it before death comes. And if I don’t say it, let no one say it for me. I will be the one who will say it.’”

Also attending both the Storymoja Hay festival and the memorial gathering for Kofi Awoonor was Ghanaian born Jamaican poet and writer Kwame Dawes. Dawes was a cousin to Awoonor and series editor of the African Poetry Book Fund which is set to publish Awoonor’s latest collection, Promises of Hope: New and Selected Poems in 2014.

He filed his report on Awoonor’s life and death on the Wall Street Journal website on Sept. 22, the day after Awoonor’s death. In it, he wrote:

“Those who will carry the heaviness of loss will be his immediate family beginning with his son who was shot and wounded in the Mall and who had traveled to Kenya to be with his father and to support him. There are other siblings, other cousins, other extended families, thousands of past students, and a Ghanaian nation that will mourn his death deeply.”

Drawing on his Ewe heritage, Awoonor translated Ewe poetry in a critical study titled Guardians of the Sacred Word and Ewe Poetry (1974). Other works of literary criticism include The Breast of the Earth: A Survey of the History, Culture, and Literature of Africa South of the Sahara (1975).

In addition to teaching at Kalamazoo College in the early 1970s, Awoonor served as chairman of the Department of Comparative Literature at SUNY Stony Book. After returning to Ghana in 1975 to teach at University College of Cape Coast, he was imprisoned without trial for his suspected involvement in a coup d’état. After his release, he wrote about his time in jail in The House by the Sea and resumed teaching.

Awoonor went on to serve as Ghana’s ambassador to Brazil and Cuba during the 1980s, and as ambassador to the United Nations from 1990 to 1994. He published Ghana: A Political History from Pre-European to Modern Times in 1990 and Comes the Voyager at Last: A Tale of Return to Africa in 1992.