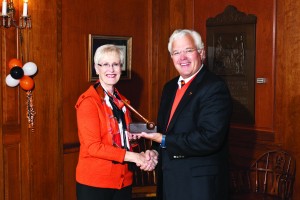 Charlotte Hall ′66 will take the gavel at the June 2013 meeting of the K board of trustees from current Board Chair Don Parfet. Hall becomes the College′s first female board chair in its 180-year history.

Charlotte Hall ′66 is slated to become the first woman to lead the Kalamazoo College Board of Trustees in the 180-year history of the College.
A K trustee since 1999, Hall will take over from current Board Chair Don Parfet, at the June board meeting. Parfet has been chair since 1999 and will remain on the board. He served a prior term as chair between 1988 and 1993.
Hall is a retired journalist who spent 40 years at newspapers in New Jersey, Boston, and Washington before landing at the award-winning Newsday in New York, where she served for 22 years. In 2004, she moved to the Orlando Sentinel in Florida, from which she retired in 2010 as editor and senior vice president.
Thank you, Don. Congrats, Charlotte.
Read more in the Spring 2013 issue of LuxEsto, the K magazine.