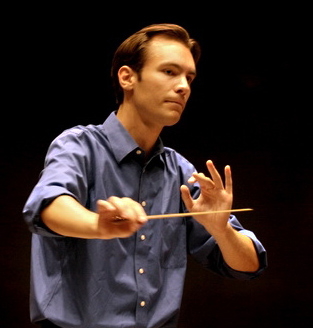 Andrew Koehler, associate professor of music at Kalamazoo College and music director of the Kalamazoo Philharmonia and the Kalamazoo Junior Symphony Orchestra, was recently honored at the 9th Grzegorz Fitelberg International Competition for Conductors, one of the more prestigious international competitions for conductors of all nationalities born after 1976.

The competition, held in Katowice, Poland, every five years, took place in three stages during November 17 to November 23, 2012. A selection committee, consisting of eminent Polish and international conductors and musicians, chose 50 participants from an initial pool of approximately 180 applicants. These 50 were invited to the first round of competition, from that 12 semifinalists were chosen for a second round, and from that, 6 finalists.

“I was the only American in the final round,” said Koehler. “We were judged on technical skill, our interpretative decisions, and our ability to work with the orchestra. It was a great honor.”

Koehler was awarded First Distinction, or fourth place, in the competition, with a monetary award of 10,000 Euros. The Krzysztof Penderecki European Music Centre also invited Koehler to perform sometime in the second half of 2013.

Yet a third award came in the form of Karol Szymanowski State General School of Music of the 2nd Degree in Katowice – the “YOUNG BATON MASTER” award granted by a Young Jury jointly to Koehler and Russian semi-finalist Stanslav Kochanowskiy.