News and Events » News Stories » Jewish Life at K: “The College made a commitment.”
Tweet 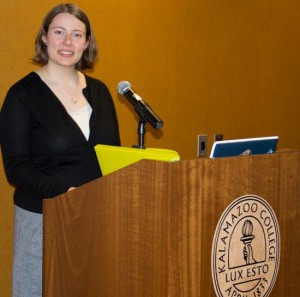 Claire De Witt ’14, president of the Jewish Student Organization at K, prepares for the Passover Seder with students, faculty, staff and guests on campus.

When Associate Professor of Religion and History Jeffrey Haus came to Kalamazoo College nearly a decade ago, the Jewish Studies program was almost non-existent.

With just a handful of classes that focused on Jewish faith, culture, and history, Haus got to work building a comprehensive, multi-disciplinary curriculum from the ground up. Today, he directs a Jewish Studies program that boasts 14 classes, ranging from beginning and intermediate Hebrew language courses to “Women in Judaism” to the “American Jewish Experience.”

“I’d like to say it’s all been my doing,” jokes Haus, who came to K from the University of North Carolina at Greensboro. “But you can’t start a program if nobody cares. The College made a commitment to support the program; the administration made a commitment, too. There’s an openness on the campus to Jewish students.

“It’s indicative of how K has changed over years and become more diverse. The Jewish Studies program is part of that change for the better.”

It’s hard to pin-down exactly how many Jewish students there are at K, Haus says. The College does not ask students their religious affiliation and doesn’t keep track of such information. But his best estimate puts the number somewhere between 100 and 150 students. 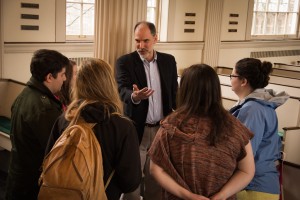 It’s a demographic that has more opportunities than ever before on campus to celebrate their faith, engage with other Jewish students, and feel a sense of inclusiveness.

“I have heard from Jewish alumni from the ’70s and ’80s who said when they were students here, they didn’t feel out of place, but there was no real organized Jewish life.” says Haus. “It’s different when you know you have a critical mass of Jewish students to support one another and create some cohesion.”

During the 2013-14 academic year, six students (Jewish and non-Jewish) signed up for the Jewish Studies concentration. As the program continues to grow, its deepening reach bodes well for the College in many ways. In addition to increasing awareness of and appreciation for the Jewish history and traditions, the concentration’s courses provide an arena for discussing issues of identity, power, and social justice.

“Jewish Studies,” says Haus, can therefore “serve as a nexus where K students can connect different parts of a liberal arts education. Studying Jewish history and religion, they can apply lessons learned from other subjects.”

In addition, the College’s curricular emphasis on social justice increases the relevance of Jewish Studies courses. “Social justice, human rights, and the relationships between majorities and minorities are central themes in Jewish history, religion, and culture,” Haus says. “Jewish communities the world over have always been committed to caring for the less fortunate. The history of Jews is therefore a history of extraordinary communal creativity in areas such as education, economics, and charity.”

Currently, there are two study abroad sites in Israel for K students—one at the Rothberg International School at Hebrew University in Jerusalem and the other at the Ben-Gurion University in Be’er Sheva, located in the Negev, a starkly beautiful desert region in the south of the nation. Both sites have their advantages, Haus says, but the Be’er Sheva site might provide a bit more authentic experience—and a better deal.

“Jerusalem is where the action is, but it’s also more expensive, and there are more limits when it comes to course offerings,” says Haus. “There are also many more Anglophones in Jerusalem, and you can get by just speaking English. In Be’er Sheva, you have a little more diverse course offerings and it’s a bit more cost effective. There are also more chances to use and learn Hebrew and hang out with Israelis. You can get by with English, but you need to use Hebrew.

“I think that no matter how many Jews there are on campus, there’s never been a better time to be a Jewish student at K,” adds Haus. “Between the strong support from the Office of Religious and Spiritual Life, strong support from the administration, and growing number of Jewish activities on campus, as well as this program, it’s leaps and bounds better than what was seen here decades ago. It’s great to have that in a liberal arts setting.”

Jewish students looking for a sense of belonging have traditionally become a part of the Jewish Student Organization, which is open to Jewish and non-Jewish students and has been on campus for decades.

Claire De Witt ’14 is deeply rooted in K’s Jewish student culture and community. The East Lansing native and double major (history and religion with a concentration in Jewish Studies) is the president of the JSO

About 10 to 15 students are part of the JSO each year, De Witt says, and they are involved with organizing campus-wide events for Jewish and non-Jewish students, faculty, and staff. Many events center around Jewish holidays, when traditional meals are prepared, such as baking hamentashen for Purim. Other activities include building a sukkah on campus for Sukkot and donating trees to Israel for Tu Bishvat.

The biggest event the JSO organizes is a Passover Seder, with a full dinner and service put on by student members. About 60 K community members annually attend the Seder, De Witt says, a time when JSO members can educate other College members about the Jewish faith.

“I enjoy JSO because of the community I am able to cultivate through our events and weekly meetings,” says De Witt. “We are a close-knit group that enjoys movie nights and cooking events together throughout the year.  As a Jewish student I truly appreciate having a safe space to gather, celebrate, and share the cultural heritage with which I so strongly identify.”

JSO isn’t the only group that has become a support network for students of the faith.

“Even six years ago, you didn’t have an option about what kind of Jewish student you wanted to be on campus. Today we have Jews from many different traditions,” says K Chaplain and Director of Religious Life Elizabeth Hakken Candido ’00. “There is more diversity among Jews. JSO used to be the primary vehicle for support, and in the past there was a feeling that if you were Jewish, you needed to be involved with JSO. There is enough room now to not have to be in JSO, if you don’t want to, and still feel supported.”

Madeleine Weisner and Jennifer Tarnoff feel that sense of belonging. The two seniors will graduate in June and have seen the campus become more inclusive and supportive of those who share their faith.

Several days a week, you can find Weisner, from Minneapolis, and Tarnoff, from Chicago, in the basement of Stetson Chapel in a cozy, albeit cramped, space called “The Cavern.” It’s a safe spot for sharing stories, hanging out and sampling free cookies and tea, or picking up “George,” the Cavern’s communal acoustic guitar. Although not tied to any particular religious tradition, there is an element of faith that permeates the space.

Currently, there are eight Jewish student chaplains, the most ever, Hakken Candido says. Student chaplains are the primary volunteers who help organize activities for the Office of Religious and Spiritual Life. Haus recalls that when he arrived at the College there were no Jewish students in those roles.

Tarnoff is a student chaplain, while Weisner works a paying job as a chapel intern.

“My dad wanted me to look at big state schools that had Hillels (a well-known Jewish campus organization),” Tarnoff says. “But I wanted to find a school that could continue the community feeling I had growing up Jewish. There were many other things that trumped going to a big school. There’s a lot of Jews at K. There’s definitely a community here.”

All too often, the Jewish high holiday of Yom Kippur occurs during orientation and move-in week. Although there is not an official College policy for them to do so, many professors and teaching staff will let Jewish students out of classes to attend services if they wish to, Hakken Candido says, and her office works with JSO to provide free rides to the synagogue of their choice. There are two synagogues in Kalamazoo—the Congregation of Moses, affiliated with the United Synagogue of Conservative Judaism; and Temple B’nai Israel, a Reform temple. Similar efforts are made for Rosh Hashanah, which also takes place in the early part of fall term.

The Office of Religious and Spiritual Life also hosts a “Break the Fast” dinner after Yom Kippur for new and returning Jewish students. The event is a great opportunity for freshman Jewish students to meet their older counterparts on campus, develop connections, and find out about Jewish life at K right at the beginning of the year.

“I didn’t grow up perhaps as religious as Jennifer. I didn’t really seek it out,” Weisner says. “But as my college life went on, I looked into my faith more. Having the college support me meant that I had room to grow in my own spirituality.”