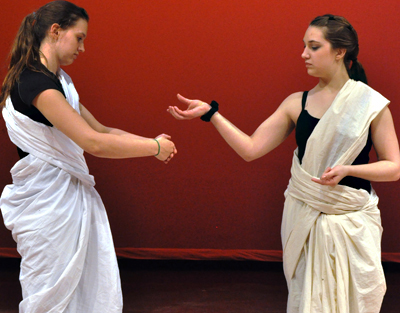 Samantha Jolly ’15 (left) and McKenna Kring ’15 rehearse for Kahani at Kalamazoo College, a play that will be performed by Kalamazoo College students in the Nelda Balch Playhouse on the K campus May 10-13, and in Varanasi, India, in July.

Ten Kalamazoo College students who are creating their own theater production this spring with guidance from a guest director from Varanasi, India, will take the show to Varanasi this summer and get a chance to see a country whose culture they have been exploring in class and on stage.

The “Kahani” project — which came about through a unique collaboration of the College’s Theatre Arts Department, Center for International Programs, and Arcus Center for Social Justice Leadership—combines many of the key elements of a K education: rigorous scholarship, critical thinking, international engagement, interdisciplinary exploration, social-justice discussions…and don’t leave out creativity and performance opportunities. 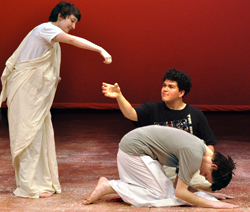 Students are spending just seven weeks devising the scenes for “Kahani” (which means “Story” in Hindi) before they present it May 10-13 at the College’s Nelda Balch Playhouse. And they are required to attend both rehearsals and a class taught by guest director Irfana Majumdar, a visiting fellow of the Arcus Center. In the photo at left, Jane Huffman ’15 (standing), Joe Westerfield ’15 (seated), and Sam Bertken ’12 rehearse for the play. Majumdar assigned readings of a novel and short stories by Indian women writers as jumping-off points for script creation, and many of those pieces explore gender and power dynamics within close relationships.

“Instead of using big issues like communalism, which are also very important in the world, I decided to stay inside smaller, closer human relationships, like within a family,” Majumdar said, “I think it’s very important for men and women to explore these issues of gender together.”

Much of the theater work Majumdar does is “devised work,” meaning it does not begin with a set script. “What is interesting about the project we’re doing, and exciting,” she said, “is…that it’s really a lot about the actors. And since they’re students and they’re just learning to act and beginning their journey of theater, it’s a way to really explore more of themselves and bring that into a project.”

The chance to create a theater piece with fellow students has been exhilarating for senior theater major Sam Bertken, a 22-year-old from northern California.

“I love the possibility for something completely new to be created,” said Bertken when the group was about three weeks into the project. He said the students started off doing exercises to “create a physical vocabulary” and build trust and then focused on their compositional skills. To create potential scenes for the final production, they split into small groups and began voicing their ideas, one right after another. “It’s like popcorning — throwing out ideas,” Bertken said.

The process has not been without its challenges, though. “It’s tough,” Bertken said. “Every time you come in you have to be really open to possibilities. The biggest problem is time. There’s this balance of ‘Are we including everybody’s ideas?’ and then ‘Are we being efficient with our time?’”

But they have had a great teacher in Majumdar, he said. “She’s been able to make those of us who’ve never done a devised theater piece feel very confident about our ability to accomplish this project, which is something to be said.”

Back in Varanasi, Majumdar leads a theater studio that’s part of a nongovernmental organization called Nirman, which offers arts-based education for primary and secondary students and study-abroad opportunities for college students. It became one of K’s 43 study-abroad sites in 2010, according to CIP Associate Director Margaret Wiedenhoeft.

The “Kahani” project got started after K religion professor Carol Anderson met Majumdar during a sojourn in India. Majumdar and her mother, Nita, who also helps run the Nirman organization, then visited K about two years ago, and Anderson introduced Professor of Theatre Arts Ed Menta to the women.

“I found out Irfana has a great theater background, and she’s also a filmmaker,” said Menta. “And I thought, ‘Wow, we gotta do something. The stars are lining up right to sort of have a convergence of theater, social justice, and interculturalism. What could be better? It’s like many of the programs and aspirations of the College coming together in one project.’”

Jaime Grant, executive director of the Arcus Center, sees Majumdar as “a perfect visiting fellow” whose work can broaden “theater people’s visions of what theater is for” and “social justice people’s ideas of what’s in their toolbox to create change.”

“If you look at social justice movements throughout the world, theater is often part and parcel of that work,” Grant said. And because the “Kahani” project is a collaborative one in which everyone has a voice, “the process itself speaks to social justice,” Grant added.

The project has been a perfect fit for “Kahani” stage manager Kathleen “Kat” Barrett, a junior majoring both in Theater Arts and in Human Development and Social Relations, a course of study that combines anthropology, sociology and psychology. She said she wanted a college experience that would boost her critical-thinking skills and challenge her thinking about the world. She also likes to keep really busy.

“I’m in various rehearsals from six to midnight most nights,” Barrett said, “but I love what I’m doing. And this production is such an amazing project that the faculty has put together for us.”

“Kahani” will take the stage at Nirman in July as the students travel to India for about 10 days, accompanied by Majumdar, Grant, Menta, and Professor of Theatre Arts Lanny Potts. For Barrett, the journey will be a return trip. She spent July through December studying at Nirman and then a few more weeks traveling through India.

“I’m really excited to go back,” said the 21-year-old, who grew up in the small northern Michigan town of Shelby. “I loved India. I loved the city (of Varanasi). It’s not Delhi. It’s not modernized in a lot of ways. But it has so much character. It’s one of the most religious locations in India because it’s right on the holy Ganges River. It has so many stories and so many people and so much culture.”

Barrett, like so many others at Kalamazoo College, is also thrilled about this opportunity for her fellow students. “I’m so excited that they put in so much work, so much critical energy and then they get to go to India and not only perform it but see the world they’ve been thinking about so much.”

That, too, will surely be an education.