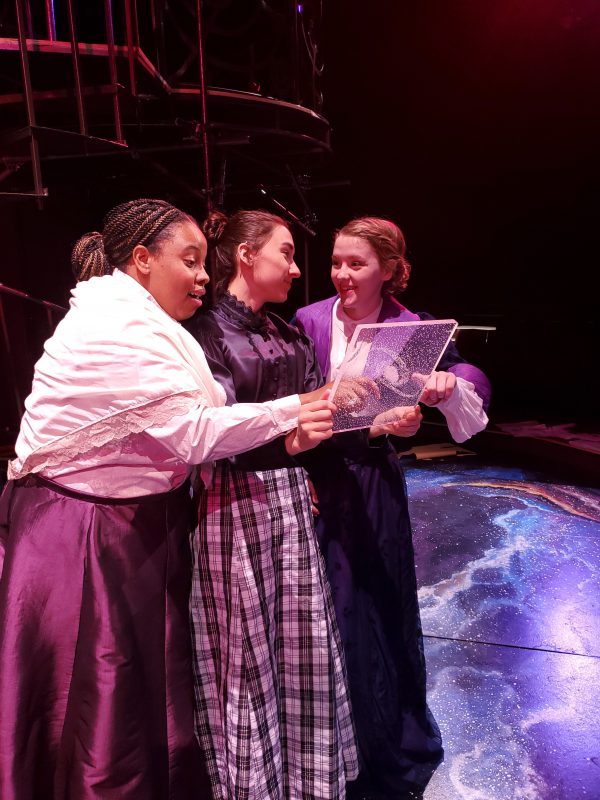 Much like an astronomer who draws constellation patterns, Aly Homminga ’20 is connecting the dots.

Homminga serves as both the dramaturg and lead actor for the Kalamazoo College Festival Playhouse production of Silent Sky. As the dramaturg, Homminga researches topics and time periods addressed in the play to assist Director Ren Berthel in teaching the actors about their characters and the play’s settings. As the lead actor, she connects those ideas to her portrayal of real-life astronomer Henrietta Leavitt.

“Dramaturgy is important, especially for Silent Sky as a period piece,” said Homminga, a theatre arts and religion double major from East Lansing. “If a director’s job is about artistic vision, dramaturgy is about facts and the time period of the play. This play goes on an arc of about 15 years, so I have to make sure Henrietta is different at the beginning than at the end. Playing Henrietta has given me a chance to test my skills and create a character who’s real yet flawed and different from me.”

The production is set in the early 1900s, as Leavitt begins working at the Harvard College Observatory, part of Dr. Edward Pickering’s “harem,” as they were known. Leavitt and her female colleagues mapped stars by taking pictures of glass plates and analyzing them, receiving no scientific credit for the discoveries they made along the way. Leavitt’s discoveries related to cepheids, which are stars that brighten and dim, and how they can be used to measure astronomical distances.  Edwin Hubble, the namesake of the Hubble Telescope, confirmed the validity of Leavitt’s discoveries about 20 years later, and her work has been credited with transforming the field of astronomy.

“I think this play is unique in the season because much of it is historical,” Homminga said. “It also marks an intersection between theatre, women’s studies and science, when science isn’t talked about or explored a lot in theatre. We want to reach out to science professors and classes, and let them see this as an opportunity to see their history, especially that of women in science.”

Scientific minds are bound to appreciate a set design developed by Wynd Raven, a local artist who was commissioned to paint the Festival Playhouse stage as a nebula, which is a cloud of gas and dust in space sometimes visible in the night sky. In addition, Homminga is creating a lobby display in her dramaturgical role. The display will focus on life at the Harvard observatory and the roles of women at the turn of the century to create an atmosphere in the context of the play that will appeal to scientists and general audiences alike.

Silent Sky will run from Thursday, Feb. 27-Sunday, March 1. Thursday, Friday and Saturday shows begin at 7:30 p.m. The Sunday show will start at 2 p.m. All shows are at the Nelda K. Balch Playhouse Theatre, 129 Thompson St.

Tickets are available through the Playhouse’s online box office. They cost $15 for adults, $10 for seniors 65 and older, and $5 for students. Tickets for Kalamazoo College students are free when they present K-IDs at the door. Faculty and staff may receive up to two tickets free with their IDs. For more information on the play, visit the Playhouse’s website.