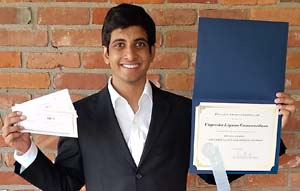 Vageesha Liyana-Gunawardana ’15 won the Special Prize in the annual Michigan Japanese Speech Contest, held at the Japanese Consulate in Detroit. Vageesha’s speech was titled “The Policeman I Met That Day Does Not Know My Name.” According to his Japanese language teacher, Assistant Professor of Japanese Noriko Sugimori, the speech is based on his study abroad experience in Tokyo, during which Vageesha was questioned by the police on thirteen different occasions. Inspired by Nobel Peace Prize winner Lester Pearson, Vageesha’s reflection upon these seemingly negative experiences reaffirmed the importance of meeting people and making an effort to understand each individual at deeper levels in order to work toward world peace. His talk, of course, was delivered in Japanese. Vageesha is a chemistry major at Kalamazoo College. He is a United World College alumnus (he attended high school at Pearson UWC in Victoria, British Columbia) and a Davis Scholar. At K he also works in the Center for International Programs.