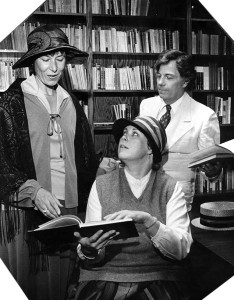 Kalamazoo College lifts the curtain early for the 50th anniversary season of its celebrated Festival Playhouse theatre arts program. Although the anniversary takes place during the 2013-14 academic year, the celebration begins May 16-19 with the staging of Into the Woods, the groundbreaking musical by Stephen Sondheim and James Lapine, produced in collaboration with the K Department of Music.
“Our history is so rich and our celebration events so numerous, we had to start this spring in order to do it justice,” said longtime Professor of Theatre Arts and Festival Playhouse Director Ed Menta, who will stage the show. “And we are thrilled to start the celebration with Sondheim’s masterpiece.”
Into the Woods will be performed in the Nelda K. Balch Playhouse on Thursday May 16 at 7:30 p.m., Friday May 17 and Saturday May 18 at 8:00 p.m., and Sunday May 19 at 2:00 p.m. Tickets are $15/Adults, $10/seniors and $5/students.
Professors of Music Tom Evans and James Turner will serve as musical and vocal directors, respectively.
This Tony, Drama Critics Circle, and Drama Desk Award winning show “helped change the ‘American Musical,’” Evans said. “Sondheim shows are special. They combine in the most masterful way, music, lyrics, and plot. Perhaps what I like most about his work is his ability to create multilevel meanings simultaneously.”
Into the Woods features memorable songs such as “Giants in the Sky,” “Agony,” and “Children Will Listen” sung by iconic characters such as Jack (of Beanstalk fame), Little Red Riding Hood, Rapunzel, and Cinderella.
“And it puts a contemporary twist on the timeworn fairy tale ending,” Menta said, “What happens the day after they all lived happily ever after?”
Kalamazoo College Professor of Theatre Arts Nelda K. Balch established the first season of Festival Playhouse—with generous support from the Dorothy U. Dalton Foundation—in 1963-64, with a schedule of groundbreaking modern dramas such as Max Frisch’s The Firebugs, Eugene O’Neill’s Long Day’s Journey into Night, and a revival of Balch’s own 1958 production of Samuel Beckett’s Waiting for Godot (the first time a college in the United States had produced this landmark Absurdist play).
Beginning this spring and running through the 2013-14 season, the College will celebrate and renew the original goals and spirit of Festival Playhouse with events that include: the grand re-opening of the Nelda K. Balch Playhouse; the return of internationally known performance artist and K alumna Holly Hughes ’77; “An Evening of Kalamazoo College Theatre Alumni Scenes;” a season of three classics of Modern Drama, including Strindberg, Ibsen, and a restaging of a rarely produced early Absurdist comedy from the original Festival Playhouse season staged by professional director and K alumna Nora Hauk ’04; a special “Talkback” series led by K theatre alumni; and much more.
“From the beginning, Festival Playhouse sought to produce provocative and thoughtful theatre by combining the talents of K students, members of the greater Kalamazoo community, and professional artists,” said Ed Menta.
“The 50th anniversary season will live up to that standard.”
Dates, locations, and more details about the 50th anniversary season of Festival Playhouse at Kalamazoo College can be found by visiting www.kzoo.edu/theatre.
Kalamazoo College (www.kzoo.edu), founded in Kalamazoo, Mich., in 1833, is a nationally recognized liberal arts college and the creator of the K-Plan that emphasizes rigorous scholarship, experiential learning, leadership development, and international and intercultural engagement. Kalamazoo College does more in four years so students can do more in a lifetime.