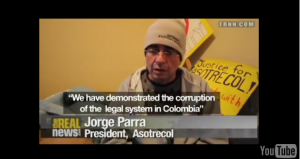 For four years, a small but committed group of injured auto workers fired from the GM Colmotores assembly plant in Bogota, Colombia have been living in a tent encampment outside the U.S. embassy, drawing attention to the plight of employees there in a nation that has few worker protections. They suffer nerve damage and spinal, hand or shoulder injuries sustained in a factory with poor working conditions.

Over the years, the men in The Association of Injured Workers & Ex-Workers of General Motors Colmotores (ASOTRECOL) have gone on several hunger strikes, some sewing their mouths shut with needle and thread, to protest GM’s inhumane treatment of workers at the plant. Plant managers would fudge workers’ medical records and injury claims in order to keep insurance premiums as low as possible and increase profits, Hammer said. Some hunger strikers endured several months on just a liquid diet.

“At the core of all this is the question of the sacred right to dignified work,” said Frank Hammer, a lead organizer with the ASOTRECOL Solidarity Network. “That’s how the Association’s leader, Jorge Parra, explains their struggle.”

Colombia ranks as one of the most dangerous countries in the world for labor organizers, Hammer said, a nation where only 4 percent of the working population is a member of a trade union. In the early 1990s, the unionized population was four times that.

When a contingent of UAW and GM officials traveled to the plant in 2012, union inspectors said the safety standards at the plant were comparable to those in United States factories in the 1970s. GM promised to install modern machinery and ensure more transparency in the handling of injury claims in response to the ex-workers’ protest. But the UAW leadership never fully engaged with the protesting ex-workers, who had, as one of their demands, the right to form a union, Hammer said.

“The workers wanted their jobs back, or in lieu of that, to receive disability payments for their injuries, he said. The company declined both requests, offering limited severance payments instead.

Still, the improvements at the plant were seen as a victory to the men. GM has also stopped firing injured workers, placing them instead on other jobs they can do. Their commitment to their cause has inspired injured workers from other industrial sectors to join with them in solidarity, including workers from Colombia’s construction and oil drilling sectors, and Coca-Cola bottling operations. ASOTRECOL member Parra traveled to Detroit in 2012 to meet with UAW officials, and while he did not get the support he was looking for, rank-and-file union members and community activists showered ASOTRECOL with support, raising $10,000 for their efforts.

At the moment, about a half-dozen or so ASOTRECOL members and supporters are still living in the tents, still fully engrossed in their fight for worker rights and protections. And as corporations become more multinational, the need for cooperation between workers across borders has never been greater, Hammer said.

“That’s one of the biggest messages of the inspirational struggle of these men,” Hammer said.

“The broader objective being to build solidarity between workers employed by the same companies in different countries who experience the same mistreatment. The companies are becoming more global; we have to as well.”