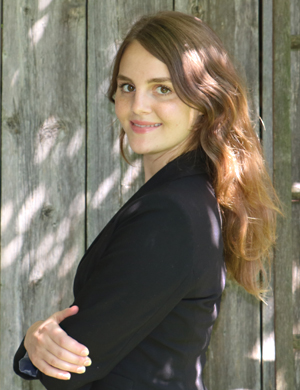 Next month it’s off to Spain for Ellie Cannon ’15, who feels thoroughly “K-Plan prepped.”

Ellie received an English Teaching Assistantship grant with the Fulbright Student Program. For nine months she will work at a school of commerce in Galicia, an autonomous community in northwestern Spain. She is excited, of course, and grateful, “Over the last five years I received invaluable academic and professional mentorship from college faculty, staff, and alumni,” she said. “Friends and classmates also educated and encouraged me.”

Galicia is one of Spain’s lesser known cultures. The population and local government are bilingual, operating in Spanish and the local language, Galego. Many Galicians identify with Celtic culture, which some attribute to pre-Roman era migration and to a more recent process of adopting Celtic-related tradition.

“I look forward to being a student and a teacher of culture,” said Ellie. “The K-Plan prepared me for both.”

She spent her early childhood in St. Paul, Minnesota, in a neighborhood blended with immigrant, refugee and working class families. When she was in middle school her family moved to a small rural town on the west shore of Lake Michigan, where “I learned about rural and maritime cultures, began to study Spanish, and tutored the bilingual children of dairy and migrant farm workers.”

When it came time to pick a college, K seemed a great option to more deeply develop intercultural competence. “As a first year student and later as a Teaching Assistant, [Professor of English] Bruce Mills’ seminar on autism acquainted me with the idea of neurodiversity,” said Ellie. “The Mary Jane Underwood Stryker Center for Civic Engagement facilitated additional service-learning in Kalamazoo, partnerships that included a poetry club at Kalamazoo Central High School, a bilingual nutrition club at El Sol Elementary, and research for the Kalamazoo County Sobriety Court.” Ellie majored in biology and psychology and earned a minor in Spanish. She shaped her academics–as well as an externship and her Senior Individualized Project–mindful of her burgeoning interest in medicine and public health. “I interned with Dr. Andrew Terranella ’99 at the bilingual Navajo Area Indian Health Service in Arizona,” she said. “My SIP reflected my interest in ecological health, and I collaborated with Dr. Paige Copenhaver-Parry on an investigation that eventually was published in the journal Oecologia (Copenhaver-Parry and Cannon, 2016).” Since graduation she has worked with immigrant families in the Kalamazoo Public Schools Bilingual Program under the direction of K alumnus Scott Hunsinger ’94.

“I look forward to continued intercultural exchange,” said Ellie. “It’s vital. I’ve come to understand that a healthy community is educated, equitable, and medically fit. And each of those components is inextricably linked to diversity and culture.”