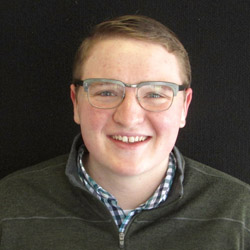 Ian McKnight ’19 came to Kalamazoo College with aspirations of working in politics. After talking to alumnus Darrin Camilleri ’14 about careers relating to political science, Ian was offered an internship on Darrin’s campaign for State Representative this summer.

During his internship, Ian spent most of his mornings collating and analyzing voter data, making phone calls and researching competitors’ tactics. In the afternoons and evenings, Ian and his fellow colleagues knocked on thousands of doors in Metro Detroit to talk to voters and to provide them with candidate and campaign information. “I do not enjoy knocking on doors,” Ian admits. “[But] knocking on doors and making phone calls really does improve results on Election Day.”

On the evening of August 2, 2016, six weeks after beginning his internship with the Camilleri Campaign, Ian stood with a spreadsheet keeping count of the votes released by each precinct. “When the last precinct came in, I got to stare [in] disbelief [at] the razor thin margin, turn to our candidate, and say, ‘Congratulations, Mr. Camilleri.’” Ian says. “At that moment, the 173 votes that won the election for us seemed totally worth every 95-degree day, every awkward phone call, and every blister.”

“It was great to see someone so freshly out of [a political science] major make a career out of it,” Ian says.  “[This internship] has given me the roadmap that I didn’t have before. In campaign work you really work your way up, and this was a phenomenal place to start.”

Ian is a rising sophomore and plans on declaring a political science major with an American Studies concentration and a public policy and urban affairs concentration. He is also the president of the College Democrats student organization.