News and Events » Fine and Performing Arts » What the Dickens?! K on the Art Hop
Tweet 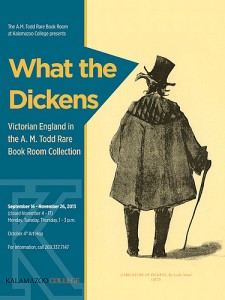 England was an incredibly rich and diverse society during the reign of Queen Victoria. Authors of the era included Charles Dickens, the Brownings, Oscar Wilde, and John Ruskin. Artists such as James McNeill Whistler, William Blake, William Morris, and Aubrey Beardsley all were creating works in very different styles. Charles Darwin completed his voyage on the H.M.S. Beagle and began to develop controversial theories on evolution. Phrenology, physiognomy, and séances all were popular. It also was an era of collecting, following the age of exploration. Travelers were covering the globe to bring back to England rare and exotic plants and animals. Examples of these various aspects of the Victorian Era are included in the “What the Dickens: Victorian England in the A.M. Todd Rare Book Room.”