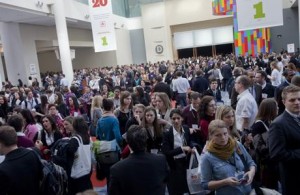 Ten recent Kalamazoo College alumni joined the Teach For America (TFA) corps in 2014. That’s enough to again place the College on the top-20 list of small colleges and universities that supply the greatest number of alumni (on a per capita basis) to TFA. It’s the seventh year TFA has released its top-20 list and the third time K has been included.

The ten K alumni joined 10,600 other TFA corps members now teaching in 50 urban and rural regions across the country.

A member of the AmeriCorps national service network, Teach For America works in partnership with communities to expand educational opportunity for children facing the challenges of poverty. Founded in 1990, it recruits and develops outstanding individuals to commit to teach in high-need schools for two years and to become lifelong leaders in the movement to end educational inequity.

TFA admission is highly selective, with an acceptance rate of only 15 percent in 2014. Corps members have 3.4 GPA average.

“We are pleased but not surprised at the high ranking of Kalamazoo College among contributors of graduates to TFA,” said Joan Hawxhurst, director of K’s Center for Career and Professional Development.

“Given the many opportunities K students have for meaningful experiences in local public school classrooms, and the theoretical rigor with which they learn to approach social issues, it’s gratifying but not surprising that so many would gravitate toward TFA after graduation.”

The ten K alumni joined what TFA called the most diverse teaching corps in its 25-year history. Fully one-third of TFA’s new corps members are the first in their families to attend college, nearly half were Pell Grant recipients (a marker for students who come from families of limited financial means), and half identify as people of color.

[Mallory Zink ’15 contributed to this report.]