Kalamazoo College alumni who were enrolled from 1963 through 1996 remember (affectionately) spending one or two summer quarters on campus. Well, many K students still spend summer in Kalamazoo, they just don’t take classes. They work, save money (except for what some might spend on craft beer!), hang out with friends, see films, read for pleasure, cook, catch up on their sleep … their adventures are endless. Summer is the perfect time for students to do everything they were too busy to enjoy during the school year! Call it a “Summer of Gracious Living.”

Here’s a sampling of students spending summer in the city of Kalamazoo, reported by Mallory Zink ’15.

Gunyeop Lee ’17 is a K student from South Korea preparing to go on study abroad to France. When he isn’t working on his great French skills, on the renovation crew for K’s Facilities Management (FacMan!), or at his summer internship at Colleagues International, you can find him hanging out on a porch in the Vine Neighborhood with some ‘dood’s.’ His favorite dood/summer lease housemate is Jeet Ghorpade ’15 (no offense to the others). Next year when he is on study abroad he is going to miss the Kalamadudes, Menna’s Joint, and chasing squirrels. 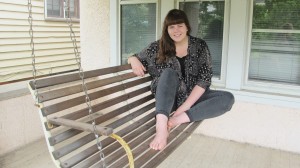 Haley Cartwright ’15 is spending her first summer in Kalamazoo. She has a lease through August and a great opportunity for one last hoorah with friends. Haley works at a Bigby Coffee shop and in K’s Admission office and she is trying to save up some money before moving to France in September! The Austin, Texas native is really enjoying her time in Michigan’s ‘temperate’ summer weather. She has been bicycling, a lot, especially to the local farmers market to get fresh eggs from Dwight, the egg guy. 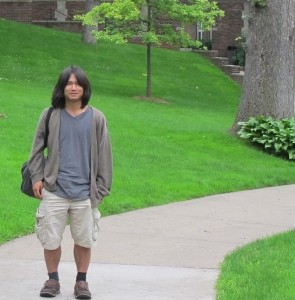 Ken Tsuchiya ’16 is spending his third summer in the “Zoo” and his second on FacMan’s custodial crew. He says he likes the custodial work because he can meditate while cleaning. Ken also works in K’s Japanese Department transcribing historical videos, which he views as a good lesson in time management and history. What Ken might enjoy most this summer, however, is making music. He has been working on a solo album for his SIP and also been playing at local venues, such as, Rupert’s, Louie’s, and at house shows in the Vine Neighborhood. Check out his band’s webpage: https://kingmedian.bandcamp.com. 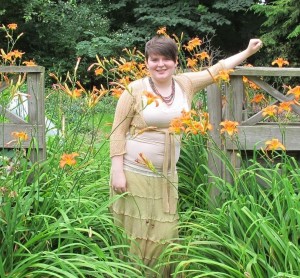 Erin Brown ’16 took the recent spring term off. So she is in the nether world between junior and rising senior, we can’t really be sure; but she’s here! Erin works as a waitress in a senior living community, house-sits, and occasionally watches a cat or two. Earlier this summer she took a fun vacation from summer vacation to visit her girlfriend in North Carolina. Erin is from Kalamazoo, (her dad owns the “Banana car!”) so she knows where all the best craft beer can be found. (Her favorite place is Arcadia Brewing.) She is also re-reading all the Harry Potter books (a yearly tradition for her). And she saw the new Pixar film “Inside Out,” which made it to her list of favorite animated films.

Shannon Haupt ’16 isn’t staying in Kalamazoo this summer only because she loves the sense of community here, but she is helping to organize an event called “Remember Kalamazoo” about the devastating oil pipeline spill into the Kalamazoo River in 2010. Check out Shannon in this NBC news clip from the event (http://bit.ly/1JLA66X). Shannon is also keeping busy by starting her SIP research and creating proposals for the College to divest from fossil fuels. She also works mornings at K’s Lillian Anderson Arboretum (https://reason.kzoo.edu/arboretum), a 140-acre learning laboratory of marsh, meadow, pine plantation, and second-growth deciduous forest in Oshtemo Township, a few miles west of Kalamazoo. In the afternoons she finds new places and people to play Frisbee with. In the evenings, she checks out new breweries and shows. Shannon really knows how to live in Kalamazoo! 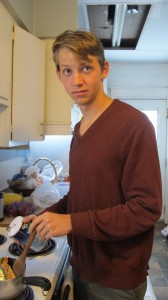 John Lewis ’15 is a “fulltime mom” to his housemates this summer. He’s also training for a job at Bronson Hospital in downtown Kalamazoo in the fall. When he’s not doing that, he’s often studying for the Medical College Admission Test (MCAT)…though he does occasionally go outside to play soccer and enjoy the sun at the Davis Street fields around the corner from his Vine Neighborhood house. His latest new found ‘hobby’ (now that he has free time) is cooking. He says heavy whipping cream has changed his life. 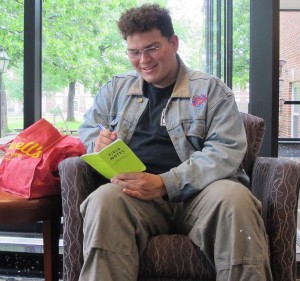 Joe Westerfield ’15 is using this summer to solidify his friendships with other recent grads before they all go their own ways. One way he does this is by cooking up a storm–for enjoyment, not for general sustainment! He has also been a huge fan of double-dates this summer and recently cooked Boeuf Bourguignon for a triple date! He watched a video of Julia Child to get the exact recipe and voice inflection perfect. When he isn’t cooking or bonding, he reads plays, works with K’s FacMan recycling crew, and tries to save money for his move to France in the fall. 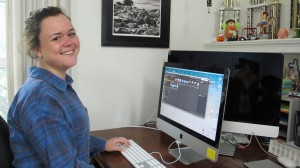 Jessie Fales ’18 is a rising sophomore from Kalamazoo who is busy working this summer. She works at Western Michigan University, K’s Office of College Communication, and in her own photography business, “Epic Fales.” She’s going to Colorado Springs for a week to photograph a wedding. Her new love this summer is coffee, which she enjoys at both Water Street Coffee Joint and Fourth Coast Cafe. While she sips, she re-reads “To Kill a Mockingbird.” She says she’s scared to read the sequel, but in a good way. 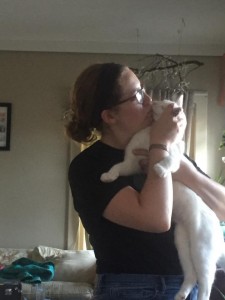 Emerald Han ’17, also a Kalamazooan, is a rising junior who transferred to K this past year. She now lives in the Vine neighborhood and works at Irving’s, a deli on the downtown Kalamazoo Mall. She also works at a flower farm in Paw Paw and partakes in the classic summer jobs of babysitting and house sitting. When she is not serving up delicious food or picking flowers, her favorite things to do are napping with her cat Kilo, reading, and hanging out with friends. She is currently reading “My Age of Anxiety” by Scott Stossel and gives it a high recommendation! 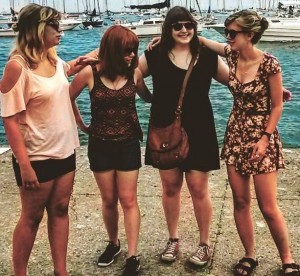 Mallory Zink ’15 (right) with Gemma Burling, Riley Cook ’15, and Becky Lennington ’15, friends from study abroad in Germany, in Chicago for a reunion.

Reporting by Mallory Zink ’15, who is also living in Kazoo this summer and working in the K Office of College Communication before heading off to a new life in Germany. You will be missed!