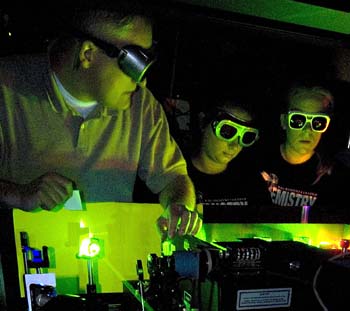 This past spring Professor of Chemistry Jeff Bartz (pictured at left with two students in his laser laboratory) received word that the National Science Foundation would provide a three-year grant to Kalamazoo College so that Bartz’ lab could conduct new experiments to evaluate how the shape of a molecule influences the mechanics of its dissociation into smaller fragments. The work began this summer and involved four students: Mara Birndorf ’16, Jeremy Lantis ’16, Braeden Rodriguez ’16, and Marlon Gonzalez ’17. And there’s nothing quite as effective as complementing classroom work with hands-on real-world experience. “My chemistry classes taught me the fundamentals, but the research is giving me an idea of what a physical chemist does,” said Birndorf. Bartz agrees: one of the great benefits of the NSF grant is its effect on students, who “move from seeing themselves as students to seeing themselves as scientists.” On a typical weekday morning these young chemists are using lasers in the type of experiments that Bartz long ago thought were unlikely to ever be performed here. After all, smaller schools do face the challenges of getting their research swallowed up by larger institutions with more resources (not to mention graduate students) to conduct a project. Despite those challenges, Bartz finds an angle for K to contribute to new scientific work. “We have to evolve if we want to continue to work at the forefront.” Like most new science, what’s going on in Bartz’ lab derives from previous work. Niclas West ’12 presented a talk, “Velocity-mapped ion imaging of methyl nitrite photodissociation,” in 2010 at the 65th International Symposium on Molecular Spectroscopy. Researchers from Texas A&M found the abstract online and approached the K team about the similarities between the two teams’ experimental techniques. The two groups decided to collaborate on the publication of a paper, “A method for the determination of speed-dependent semi-classical vector correlations from sliced image anisotropies,” which included K student co-authors West and Kelly Usakoski ’14. After this paper came out in The Journal of Chemical Physics, Bartz began work on the proposal the NSF funded last spring. “We are looking at information gaps in previous work that our current experimental techniques can help fill,” Bartz said, “sort of testing old experiments in new ways. It’s kind of a K niche we’ve carved out.” (text by Colin Smith ’15)