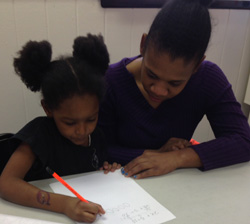 Seniors Roxann Lawrence and Raven Fisher have integrated community service into their undergraduate academic learning in ways that are unmatched by most college students in the state of Michigan. And it hasn’t gone unnoticed. Roxann and Raven are co-recipients of the Outstanding Community Impact Award, given annually by the Michigan Campus Compact (MiCC). Only six such awards are given in the state (and some 600 students were nominated). In addition to honoring Roxann and Raven (both of whom will address the 18th Annual Outstanding Student Service Awards Celebration on April 12 in East Lansing, Michigan), MiCC will also bestow its Heart and Soul Award to 14 other Kalamazoo College students. They are Dana Allswede, Zoe Beaudry, Ebony Brown, Jordan Earnest, Amy Jimenez, Sherin John, Komal Khan, Colin Lauderdale, Katherine Mattison, Ayesha Popper, Chelsey Shannon, Eren Sipahi, Sarah Sullivan, and Madeline Vermeulen. The Heart and Soul Award recognizes students for their time, effort, and personal commitment to communities through service.

Roxann and Raven have been involved with Community Advocates for Parents and Students (CAPS), an advocacy and tutoring initiative founded in 2005 in response to the Kalamazoo Promise, which provides college tuition for Kalamazoo public schools graduates to any Michigan public university, college, or junior college. CAPS believes that all children, despite their economic circumstances, can learn and successfully take advantage of the Kalamazoo Promise College Scholarship Program. The program has made a difference for some 400 socioeconomically disadvantaged children. 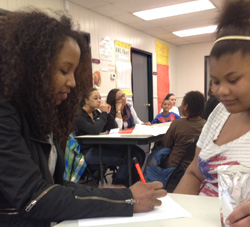 Roxann and Raven were CAPS tutors during their first year at K. As sophomores they took a leadership role as Civic Engagement Scholars (CES) in the CAPS program. The CES program is part of the College’s Center for Civic Engagement. They are serving as co-directors of all K tutors in the program during their senior year. Both women are active in other campus organizations. Raven is president of K’s Black Student Organization; Roxann is president of the Caribbean Society. Roxann’s Senior Individualized Project focused on LGBT issues in her native Jamaica. Raven’s SIP involved working with Kalamazoo Public Schools on a program to introduce and measure the effect of a culturally relevant math curriculum for middle school students.

Michigan Campus Compact is a coalition of college and university presidents who are committed to fulfilling the public purpose of higher education. MiCC promotes the education and commitment of Michigan college students to be engaged citizens. Roxann and Raven were nominated for the Outstanding Community Impact Award by Teresa Denton, associate director of K’s Center for Civic Engagement.