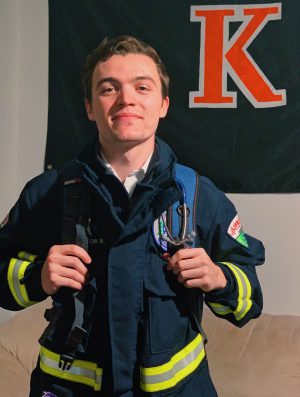 Brandon Wright ’21 is working as an emergency medical technician for Life EMS in Kalamazoo. At age 14, Wright saw his mom endure breast cancer, inspiring him to one day attend medical school and seek a career in medicine.

Imagine, as a 14-year-old child, seeing your mother endure breast cancer. How might that affect you? For Brandon Wright ’21, it prompted him to attend his mom’s chemo and radiation treatments.

“She went through chemo and radiation for a year,” said Wright, a biology major and physics minor from Dexter, Michigan. “I went to her treatments to understand them better. I still remember them like they were yesterday. It was an early moment when I realized that something bigger than me was going on.”

Thankfully, Wright’s mom today is a survivor. And by the time she was cancer-free, her son was inspired to seek a career in medicine. A physical therapist by trade, Mom helped arrange some job shadowing with doctors for Wright during his high school years, and he plans to attend medical school after graduating from Kalamazoo College. In the meantime, Wright is embracing a role as an emergency medical technician (EMT).

Wright trained as an EMT after his first year at K, realizing he would need to spend hands-on time with patients to optimize his chances of getting into medical school. After more than 256 hours of accelerated coursework that summer—and several certification tests and clinical trials afterward—he was offered a part-time job working for Life EMS in Kalamazoo.

“I thought I would do something I knew I would like rather than something I thought I had to do,” Wright said. “The exciting thing is we can get a not-so-serious call, and then, in the next second, all of a sudden we’re called to treat a cardiac arrest. The unpredictable nature of the job keeps me on my toes because at any second, it could be something new.”

Cardiac arrest is among the most serious calls Wright responds to and he remembers the first time he responded to one in March 2019.

“I was still in training and the call was for an 8-year-old boy,” Wright said. “My trainer had me participate in CPR because I was brand new, and that shook me for a while. I’ve probably responded to 10 or more cardiac arrests since then and, thanks to my trainers and partners, I feel I’ve developed the skills and mental capacity to handle them. It’s relatively straight forward for me now.”

The COVID-19 pandemic has affected Wright on the job. Ambulance dispatchers began using a code over the radio to let EMTs know when they were responding to a scenario where coronavirus could be present. That typically means Wright and his colleagues wear face shields, gowns and N-95 masks in addition to normal protective standards during the call, and take special steps to wipe down the ambulance and change clothes afterward.

Wright and his colleagues have found coronavirus to especially be a problem in the homeless population in Kalamazoo. With that knowledge, and with additional experiences in responding to emergencies such as gunshot wounds and overdoses, Wright recognizes his privilege as a student, which has fueled his desire to be involved in the community and help others one day as a doctor.

“The biggest thing I’ve realized is how many emergencies there can be anywhere,” he said. “At any time, we might have 10 trucks out just to cover all the emergencies. That’s really opened my eyes to how many people need help. It has confirmed my desire to go into medicine.”

To further his community involvement, Wright in the 2020-21 academic year will serve as a President’s Student Ambassador. The student leaders serve as an extension of President Jorge G. Gonzalez’s hospitality at events and gatherings, welcoming alumni and guests of the College with a spirit of inclusion.

“Many students get caught up in going to school, but there are a lot of ways we can integrate more into the community,” Wright said. “I wanted to be an ambassador because I wanted to bring my experiences to the table to start that conversation about involvement. I also want to hear from alumni about their own K experiences and take those lessons back to other students.”

With the Day of Gracious Living expected soon, along with its traditions including community service, Wright reflected on what he’s been most grateful for in his time at K.

“I think I’m most grateful for the fact that K gave me the opportunity to study abroad in Quito, Ecuador,” he said. “Even further than my community experiences in Kalamazoo, I was able to compare and contrast them on a global level with what I experienced in the lower-income country of Ecuador. Learning about some of their disparities in public health allowed me to recognize some ways that the U.S. system is also failing many. It is no doubt an experience that I will remember and value as I pursue a career in health care.”

The K-Plan teaches students to adapt to the unexpected situations of our ever-changing world. When the Day of Gracious Giving is announced, please make a gift to support K’s robust academic and experiential learning opportunities that help prepare the leaders and problem solvers of tomorrow.