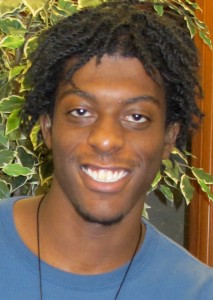 “It was a complete surprise when I got the email saying I got selected,” Marquise said. He attended the National Student Leadership Forum Conference in Nov., a larger conference, also in D.C., from which National Prayer Breakfast attendees were chosen.

According to Marquise, the two events promote a leadership model that focuses on the role of love in leadership.

K Chaplain Elizabeth Candido ’00 nominated Marquise for the fall Forum and is impressed that he was chosen for the interfaith Breakfast gathering.

“Marquise is just a great Christian leader on campus,” she said. “He’s growing in his leadership abilities. Being selected to attend the National Prayer Breakfast is an acknowledgment of that. It’s a really big deal.”

Marquise identifies as a nondenominational Christian. He says he grew up with the Bible as a guiding source for how to live his life and credits overcoming the hurdle of severe hearing loss for fueling his drive and unwillingness to accept human limitations.

“As a kid, I felt cursed. I felt like God had turned his back on me for that to happen,” he said. “Over time, I began to grow spiritually and realize my hearing loss was not a curse. It was actually a blessing.”

Currently an English major, Marquise has a notion to add theater and classics. He said having a degree in the liberal arts will provide him with a well-rounded base, which he intends to apply wherever God needs him.

“I try not to get too wrapped up in trying to plan out exactly what will happen,” he said. “What I really want to do…is to see how I can help better people.”

His faith, he added, assures him that he isn’t going through life randomly. “I have a purpose in life that I have to achieve things that will last long after I’m gone from this earth,” he said.