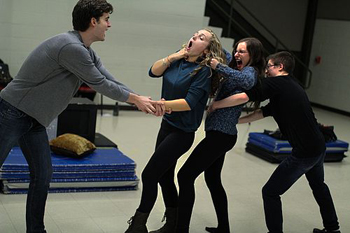 Festival Playhouse of Kalamazoo College presents the contemporary comedy Bad Jews, a play that explores what it means to be Jewish in contemporary American society. Written by Joshua Harmon, the play will have four performances in the Dungeon Theatre (Light Fine Arts Building) on Thursday through Sunday (Feb. 25-28). It is part of Festival Playhouse’s 2015-16 season “Theatre and Belonging: Stories of Ethnicity and Racial Identity.”

Staged in the round, with production design by Lanny Potts (professor of theatre arts) and costumes by Elaine Kauffman, the story takes place in an apartment in New York City shortly after the death of the family patriarch, the grandfather of Liam, his younger brother Jonah, and their cousin, Daphna.

Liam is Jewish in name only and chooses to pursue everything that has nothing to do with his heritage. Daphna intentionally embraces all things Jewish. Like Melody, Liam’s shiksa girlfriend, Jonah often seems caught in the middle between the extremes of his cousins. It is not until the end of the play we learn where he stands on the question, “How Jewish are you?”  The New York Times praised the play as the best comedy of the season, characterized by ”delectably savage humor.” The subject matter and language are for mature audiences.

K’s production is a collaboration between director Ed Menta (the James A. B. Stone College Professor of Theatre Arts) and Jeffrey Haus (associate professor of history and religion and director of the College’s Jewish Studies Program). Menta and Haus invited Dr. Jonathan Freedman, Jewish studies scholar from the University of Michigan, to speak about the play and its themes on Wednesday, February 24, in the Olmsted Room at 7 p.m.. Freedman and Haus will also lead a talkback following the Thursday performance of the play.

The play opens Thursday, February 25, at 7:30 p.m. Additional evening performances occur Friday and Saturday, February 26 and 27, at 8 p.m., and a matinee concludes the run on Sunday, February 27, at 2 p.m. Tickets are $5 for students, $10 for senior citizens, and $15 for other adults. For reservations call 269.337.7333. For more information, visit the Festival Playhouse website.