We invite individuals who are familiar with this project to use our Community Input form to comment on its “grassrootedness” and transformative leadership practices. Input will be submitted to our jurors. Please see videos submitted by each finalist, as well as our rubric and other information about the Global Prize here. 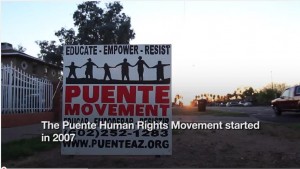 The struggle of many Latino migrants to the United States routinely goes unnoticed, due mostly to the undocumented status of many of these new arrivals, who do their best to not draw attention to themselves. But underneath the hardworking veneer, are stories of heartbreak, of families broken apart as immigration officials enact deportation procedures. Migrants come to the United States to fulfill dreams of a better life. Many wind-up living in crippling fear. 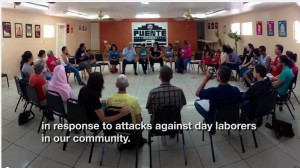 Attention on the plight of immigrants, especially Latinos, is becoming more focused as immigration becomes more of a front-and-center issue in the upcoming presidential election. One group has been a helping hand long before the campaign rhetoric. The Puente Human Rights Movement is a grassroots, migrant justice organization based in Phoenix, Ariz., which develops, educates, and empowers migrant communities to protect and defend themselves and their families to enhance the quality of life of community members.

“Arizona has been known as ground zero for the right wing anti-immigrant attack since racial profiling bill SB1070 became law in 2010,” said Carlos Garcia, director of Puente. “But the war of attrition waged against our community started long before then. What started in Arizona spread across the country, leading to the Obama administration’s record two-million deportations. In response, we knew we had to make Arizona an epicenter of migrant-led resistance.”

True change comes only when impacted communities organize, act and speak for themselves, the organization says. Puente’s accomplishments are both local and national in scope – they measure their impact through the development of their base, the concrete alleviation of the migrant community’s suffering and the political reach of their demands.

By halting deportations through its “Uno por Uno” (One by One) program, Puente – which translates to “bridge” in Spanish – attempts to transform the immigration debate, build new leaders and challenge the criminalization and mass incarceration of migrant communities.

Stopping deportations, and working to reunite families torn apart by the deportation, is one of Puente’s biggest efforts. Since 2013, Puente has used legal advocacy, storytelling, and community organizing to stop over 150 deportations. Through securing the release of people from immigrant detention and stopping deportations, new leaders emerge with personal experience of how to fight back against criminalization, detention, and deportation and commitment to ensuring that no one is left behind in that struggle.

Noemi Romero, who was arrested by notorious Sheriff Joe Arpaio in a workplace raid in 2012 and who know helps stop other people’s deportations with the Uno por Uno project, says, “It was the worst day of my life when the sheriffs showed up at my work. But then my mom found Puente and we learned our rights and how to fight back. Since the day I got out of detention, I have committed to fight for our entire community. I won’t stop until we have justice for everyone.”

Carlos says, “Without the leadership of people who know firsthand the pain of being targeted, incarcerated, and separated from their families, we never would have seen the expansion of deferred action last year, the most important victory for the immigrant rights movement in 25 years. However, many of those who fought the hardest for this relief have been criminalized, like Noemi, and are therefore excluded. Our work is part of the movement against mass incarceration, and we continue to center the leadership of formerly incarcerated people as key to a migrant rights movement that is achieving justice and dignity for everyone.”

With a fist in the air, Puente is working to fight the anti-immigrant stain seen in Arizona in the aftermath of the now-infamous Senate Bill 1070, which was vetoed by Gov. Jan Brewer. With an open hand, Puente organizes and maintains cultural, political, and educational programs to promote and sustain justice.