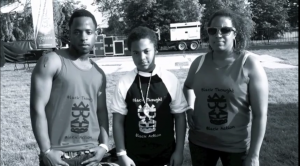 Black on Both Sides

The foster care system in the United States has a darker side to the benevolent image it tries to portray to the public, according to one social justice organization trying to demolish foster care altogether.

What hides in the shadows of this child care and rearing model is a kind of unofficial pipeline to the prison industrial complex, says Charity Tolliver, founder of Black on Both Sides, a project working to build a new generation of Black organizers towards the abolition of the foster care and prison systems.

Studies have shown that 80 percent of the prison population had spent time in the foster care system when they were younger, Tolliver says.

“That is not just surprising, it’s indicative of a messed up system,” she says. “It’s a dysfunctional system for those it’s supposed to serve.”

The majority of foster care children are removed from their biological homes for neglect – which really means poverty, Tolliver says. But instead of providing additional resources to struggling families to keep children with their parents, benefits – WIC, food stamps, and other assistance measures – are being cut, while at the same time, foster families are being paid to care for these kids.

These young, mostly Black youth are taken away from their mothers, who are negatively stereotyped as abusive, loud, oversexed and unruly, set into the foster care system, where they are more likely to wind-up immersed in the juvenile justice system and, eventually, the prison system at-large, she says. This model eerily resembles the slavery-era practice of slave masters removing children from their mothers, treating the mothers merely as aspects of production and their children as commodities, she adds.

“It’s got less to do with money and more to do with disposable black bodies and create places to put them, to confine them in a post-slavery, neo-liberal society,” Tolliver says. “This pipeline, starting when a person is young, ensures a policy of sequestration of disposable, black bodies from the rest of society, while the increasingly for-profit foster care and prison industrial complex is able to increase profitability with a steady stream of new inmates.”

The project highlights the voices and experiences of Black youth who have experienced both the foster care system and the juvenile or adult justice system, while launching a direct action organizing campaign to address the root causes of the foster care to prison pipeline.

Blacks on Both Sides pushed for a foster care bill of rights for foster kids in Illinois, which has passed through the state’s Senate and House, as well as a restorative justice model to deal with non-violent issues in a foster home, like arguments, stealing money or running away, problems where law enforcement is routinely called. Studies show that a foster child who is arrested – even for these minor offenses – is 15 percent more likely to wind up in prison, Tolliver says. The organization is looking to move nationwide with its restorative justice efforts and push for a national bill of rights for foster kids.

“We all know that children are best kept with their parents,” she says. “All of our work is focused on righting these injustices and reuniting families, where kids are their healthiest.”