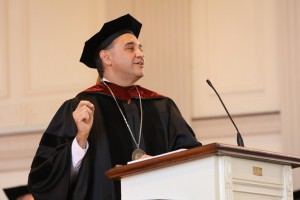 Kalamazoo College inaugurated its 18th president, Jorge G. Gonzalez, in a celebration Saturday, Nov. 5, 2016, at Stetson Chapel. Dozens of colleges and universities from across the country sent representatives to the ceremony to join college trustees, alumni, students, faculty, staff, family and friends in the festivities.

“My grandfather and father could never have imagined a Mexican would have a chance to be a president somewhere such as K,” Gonzalez said during his inaugural address.  A native of Monterrey, Mexico, Gonzalez earned his master’s degree and Ph.D. in economics at Michigan State. His wife, Suzie, is a 1983 Kalamazoo College alumna. “It is an honor and a privilege to lead an institution that has a 183-year history.”

Charlotte Hall, the chair of the college’s Board of Trustees, said one of the board’s most important roles is to select the right leader at the right time. “We looked at his long and distinguished career as an economics scholar, brilliant teacher and inspired leader,” she said. “I know his visionary leadership will make K stronger and better, more exciting, more humane, more true to our mission.”

Gonzalez said immersion in the liberal arts at a school like Kalamazoo College is the most powerful and life-enriching form of undergraduate education, especially when students have opportunities to apply their academic work. He emphasized technological change, globalization, diversity and urbanization as important new drivers for such an education.

“What you need to learn is not today’s reality; you need to learn how to learn, and this is exactly what a liberal arts education at K can provide,” Gonzalez said. “It will teach you to look at problems from a variety of perspectives, and deal with uncertainty and complexity.”

Gonzalez began his presidency at Kalamazoo College on July 1, 2016. He succeeded Eileen B. Wilson-Oyelaran, who announced her retirement in April 2015. Gonzalez arrived from Occidental College, where he served as vice president for academic affairs and dean of the college, and created and supported experiential learning programs, allowing students to engage the world in ways that draw upon their liberal arts education. He also has worked at Trinity University in San Antonio, Texas, where he served as a professor of economics and special assistant to the president.

Kalamazoo College, founded in Kalamazoo, Mich., in 1833, is a nationally recognized liberal arts and sciences college. It created the K-Plan, which emphasizes rigorous scholarship, experiential learning, leadership development, and international and intercultural engagement. Kalamazoo College does more in four years so students can do more in a lifetime.