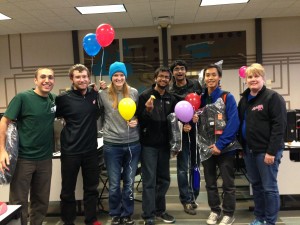 “It’s the first time we’ve placed in the top 5 at our site!”

The two K teams, made up of three students each, finished fourth and fifth among 26 teams participating at GVSU. Out of 130 teams competing at four separate eastern region sites, K teams finished 17th and 23rd.

“I’m feeling quite pleased that we beat three out of five teams from University of Michigan,” Cutter said.

With schools such as University of Waterloo, University of Toronto, Carnegie Mellon, University of Michigan, and Notre Dame, Cutter said “Ours is known as a tough region. Because of this, our region gets to send three teams to the world finals, whereas most other regions only get to send two.”

Cutter said the top five teams at each site receive prizes, so each K student earned a backpack. Each K team also won a special award: the Black Hornets won the Jolly Jumpers award for highest jump in rank and the Orange Hornets tied for the Solid Programmers award for most problems solved with least penalties.

Left to right in the photo, they are Kamal, Kyle, Sarah, Raoul, Abhay, Jacob, and Professor Cutter.

Full results from the regional competition are here: https://ecna15.kattis.com/standings?filter=375.